watch 03:15
'World of Warcraft The Burning Crusade' - Patch 2.4 Fury of the Sunwell
Do you like this video?

“Fury of the Sunwell” 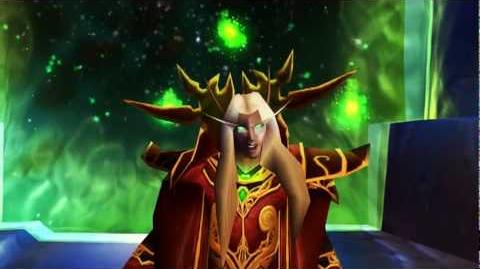 Fury of the Sunwell

The glorious fount of arcane energy known as the Sunwell empowered the high elves for millennia, until the death knight Arthas laid siege to the elven kingdom and corrupted its sacred energies. Seeing no other alternative, a band of survivors led by Prince Kael'thas destroyed the ancient fount. Over time the surviving elves fell prey to a crippling magical withdrawal.

Now, promising salvation for his people, Kael'thas has returned. Soon the Sunwell will shine once again, but whether the sacred fount will usher in deliverance or destruction remains to be seen.

Blizzard Entertainment would like to dedicate the patch in memory of Gary Gygax. His work on D&D was an inspiration to us in many ways and helped spark our passion for creating games of our own. As avid D&D players and fellow game developers, we were all saddened by the news of his passing; we feel we’ve lost a true adventuring companion. Thanks for everything and farewell, Gary. You will be missed.

Kael'thas Sunstrider says: It was called the Sunwell! A sacred fount of untold power it saturated every fibre of our being in the warmth of its glow we thrived, until the shadow of death fell upon us. Only after the Sunwell's destruction did we realise how dependant we had become on its magic how much we needed to feed. In the wake of our devastation I named our people Sin'Dorei, Blood Elves, my people turned to me for answers. I promised them a cure, strangely we found deliverance in the demon Illidan. Illidan offered new sources of arcane power and so I joined him in Outland pledging to return one day to lead our people to glory! But Illidan's agenda was short sighted, I grew impatient. In secret I began harvesting what energies I could. I had a brief taste of true power before it was taken from me. But all is not lost the Sunwell's essence endured kept hidden by those who sought to protect it. Now I have returned with the knowledge that sacrifices must be made before we can reclaim our birthright. I have forged a new alliance. Soon the blessed rays of the Sunwell will shine once again, and usher into this world the one who will deliver us all

Players will be able to create level-70 characters with epic equipment and compete on special tournament realms in a new global arena tournament. For more information, details and entry requirements, please visit the official tournament pages.