The paper doll frame is the part of the character info window that shows a rendering of what the player's character looks like and the various item slots that can be equipped (held or worn) by the character. The rendering should update based on what items the character has equipped. 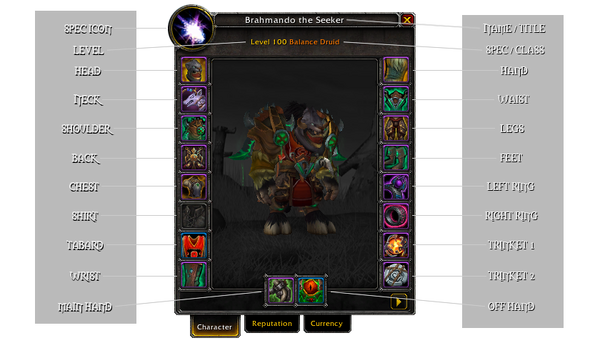 The Paper Doll frame displays various information about your character, including:

Extreme top-right of the window, this button (

) closes the window. Basically following the MS Windows UI convention, since on the Mac OS, the equivalent UI button is at the top-left (red marble in OS X).

There can also be up to three tabs at the bottom of the window:

Retrieved from "https://wowwiki.fandom.com/wiki/Paper_doll?oldid=2788864"
Community content is available under CC-BY-SA unless otherwise noted.