Available only to those who receive the Papa Hummel's Old-Fashioned Pet Biscuit card in the World of Warcraft Trading Card Game that has the "scratch off gently" strip. Once you scratch and reveal the code, you can turn it in to Landro Longshot in Booty Bay.

Emphasis: This buff is not permanent. It fades from the pet every time the pet dissapears, for example, every time your character dies or rides on a gryphon, requiring the biscuit to be re-applied. Thus the 50 biscuits can be used up very quickly.

Note: This item also is included in World of Warcraft: Wrath of the Lich King Collecter's Edition

It's no longer "mini" diablo

Fortunately it is tranquil

Baby Elekk has your back 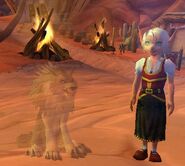 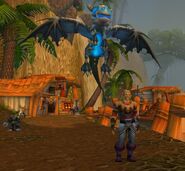 Nope, not as big as the Lich King's
Add a image to this gallery