Although the Paladins were once loved and revered throughout the lands of Lordaeron, they have since fallen on hard times. The entire Order of the Silver Hand was disbanded for refusing to kill innocent townsfolk who were believed to be contaminated by the dreaded Undead plague. Disenfranchised and driven from their former homes, the Paladins still work selflessly to protect humanity from the gnawing jaws of evil. Empowered by the Light, these mighty warriors brandish both warhammer and holy fire in battle against all who would trample the meek and innocent.

The Paladin is a melee hero but isn't quite as powerful as the Demon Hunter, Blademaster, or Mountain King. The Paladin is more of a background support Hero with a melee attack. The Paladin's spells are all useful. Holy Light is very useful for healing units during combat, especially at the start of the game against Creeps. Holy Light also rules for healing allied Heroes or your own Heroes. It's much cheaper to heal a unit and have it continue than replace it. The Paladin's Divine Shield can save him if he is about to die or can allow him to do hit-and-run attacks. The Devotion Aura is useful when combined with Knights and Footmen and especially useful in allied games with lots of allied units. Resurrection is also really good because it can bring 6 units back to life. At it's best you can return say 6 Knights, or a mix of powerful allied units back to life.

The Paladin is fairly easy to kill using focused fire or surround and kill with melee units. Paladins should teleport away or make sure they don't get surrounded. Learn to run away.

A holy light that can heal a friendly living unit or damage an enemy undead unit.

The Paladin cannot cast Holy Light on himself.

Holy Light is much easier to use with Sub Groups. Simply group select units and hit tab until the Paladin's Holy Light button shows up. Left-click on the Holy Light button to target the spell, then left click on a damaged unit's portrait in the Sub Group. This will cause the Paladin to heal the unit without having to click on the unit itself. With practice you can quickly heal damaged units in battle, making this a very effective spell. The Paladin can keep important units such as Knights, Priests, and Sorceresses alive. If the enemy continues to attack them, the Paladin can continue to cast Holy Light to heal the damaged units. At the same time you can use other units to hit the attacking enemy units from the rear and make them pay the price for focusing on that specific unit.

Holy Light is very useful early on when trying to level up. You can attack Creeps with a small force and quickly recover from damage using Holy Light.

Use Holy Light on allied Heroes in team games. Just request allies to ask for Holy Light to let you know they need it. They can say "HL or Heal".

Holy Light can be empowered quite a bit, both as healing for your own units and as damage against Undead, when combined with the Blood Mage's Banish. This combo is very nifty for damaging and healing units with a lot of HP, such as Heroes.

Devotion helps units take less damage. It is very useful for groups of Footmen and Knights and even more useful for large team games where the Aura helps lots of units in battle on the team. Typically players focus on Devotion early on along with either Holy Light or Divine Shield.

An impenetrable shield surrounds the Paladin, protecting him from all damage and spells for a set amount of time.

Divine Shield is an invincibility spell. You can cast this and the enemy cannot harm your Paladin until the spell wears off. Divine Shield allows you to use a Hero without having to worry about the enemy killing it. Divine Shield is also handy for running away when your Hero is about to die. You can run in and attack the enemy, waiting until they attack before using Divine Shield. You can then attack all you want while they can't respond. When it wears off you can use an Invisibility Potion to get away.

Just run away until the spell wears off. Paladins hate that =)

Brings back to life the corpses of 6 friendly nearby units. The spell will choose the most powerful corpses to resurrect if there are more than 6.

Resurrection is an incredibly powerful spell because it can allow up to 6 units to come back to life which is essentially giving you up to 6 free units without cost. The spell is best used when there are at least 6 units to raise.

If you Resurrect allied units, those units will go back to the original owner's control (your Ally)

Going Over the Food Cap

It is possible, using Resurrection, to go over the food cap. Say for example, you have reached your food cap of 100, and six Knights die near your Paladin. Immediately train additional units to get back to the maximum food limit, and then cast Resurrection to resurrect your six Knights that died. This will then allow you to have 124/100 food used, giving you an advantage during battle.

Undead players can use Meat Wagons to remove the corpses or cast Raise or Animate Dead to prevent the enemy from Resurrecting.

The Archbishop, Alonsus Faol, prior to the Second War, founded the Order of the Knights of the Silver Hand. The holy knights, or paladins, as they are commonly called, led the battle against the evil orcs and helped to save the lands of Lordaeron from ruin. Though it has been nearly fifteen years since the end of the Second War, the paladins still work selflessly to protect humanity from the gnawing jaws of evil. Empowered by the Light, these mighty warriors brandish both their warhammers and holy fire in the battle against all who would trample the meek and innocent. 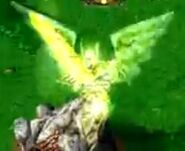 The angel summoned by Resurrection.
Add a image to this gallery

Retrieved from "https://wowwiki.fandom.com/wiki/Paladin_(Warcraft_III)?oldid=2404357"
Community content is available under CC-BY-SA unless otherwise noted.