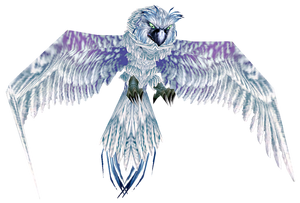 Owls are broad-faced, nocturnal birds known to hunt rodents and reptiles. They look different from most birds in that they have wide faces, short curved beaks, and large, front-facing eyes.

Owls are found throughout Teldrassil, Felwood, and Winterspring. In Alterac Valley, the Alliance has befriended the owls. Owls have also been found in Outland, though under different names: the brown and black kaliri in the Hellfire Peninsula and Sethekk Halls (a species of bird raised by the arakkoa) and the brown windrocs in Nagrand.

Night elf sentinels are known to use owls as guards and spies. A trio of owl guards can be found at the Shrine of Seven Stars in the Vale of Eternal Blossoms.

The following subspecies of owl can be tamed by hunters and fall into the bird of prey family.

Mobs listed with levels can be tamed.

An Alliance player can purchase two types of owls as vanity pets from Shylenai before the gates to Darnassus:

Retrieved from "https://wowwiki.fandom.com/wiki/Owl?oldid=2752020"
Community content is available under CC-BY-SA unless otherwise noted.