Leader of the New Alliance

Othmar Garithos[1] was the Grand Marshal leader of remnants of the Kingdom of Lordaeron following its downfall during the Third War and also the de-facto leader of Alliance forces in Lordaeron, which was dubbed the "New Alliance". Even in the situation the Alliance was facing after the Third War in Lordaeron, the Grand Marshal was very disdainful of non-human races of the Alliance. Garithos cooperated temporarily with the undead that would eventually become known as the Forsaken (which would quickly lead to his downfall).

Grand Marshal Othmar Garithos was the only son of a baron who ruled over lands in what would later be the Eastern Plaguelands that bordered Quel'Thalas. While his father ruled from the town of Blackwood on the shores of the similarly-named lake, Garithos joined the army as a knight during the Second War, where he saw combat in Quel’Thalas defending the elves’ homeland from invading orcs. While he was in Quel’Thalas, however, a small band of orcs broke off from the main invading force and burned his home town to the ground, killing all of its inhabitants in spite of the valorous defense marshaled by its lord. Othmar’s family perished doing their duty, defending the homes and lives of their subjects. He blamed the elves for the loss of his town and family, believing that the elves diverted forces away from the Alliance’s true goal: the defense of humanity alone. After his father’s death, Garithos was awarded his title and continued his service in the armies of Lordaeron.

By the time of the Scourging of Lordaeron, he had attained the rank of Grand Marshal and was the highest ranked surviving military officer in the region, promoted not necessarily due to his own abilities, but his father’s reputation and title. Cut off from the chain of command, Garithos amassed a small army of volunteers and conscripted civilians, and gave them the mission that he assumed the Alliance should have always had: the preservation of humanity above all else. Despite the ad-hoc nature of his forces, other states recognized him as potentially the last remnant of Lordaeron’s government and certainly the strongest warlord in the area. As such, officials from neighboring non-human states such as Ironforge and Quel’Thalas sent him aid, ignorant of his intolerant and prejudiced policies.[1]

Garithos was a survivor of the Scourge's rampage across Lordaeron and he recruited what forces he could muster to fight against the Scourge. Later, the healthiest blood elves, led by Kael'thas Sunstrider, the elven prince of the ruined Quel'Thalas, joined him.[2] Although the army was formed, Garithos was terribly racist and did not enjoy having to work with the blood elves[3] or dwarves.[4] His belief was that the Alliance should never have accepted the elves in the first place,[3] so Garithos dealt with his racist beliefs by putting those races to work at menial tasks, such as staying to guard an area while his men moved on elsewhere.[2]

Retake and defense of Dalaran

Garithos and his forces managed to retake Dalaran from the Scourge[5] and used it as their base of operations.[6] Later, Garithos gave Kael'thas the job of overseeing a caravan of supplies being ushered out of ruined villages;[7] though Kael completed the mission, he wanted his people on the front lines with Garithos's main forces.[6]

While they were in Dalaran, Garithos' scouting parties discovered a large undead strike force advancing through Silverpine Forest to attempt to retake Dalaran. Before Garithos left to push back the advancing scourge from the south, he informed Kael'thas that he and his brethren would not accompany them on the front lines; instead, they would be tasked with fixing the nearby observatories to watch for Scourge flanks from the west, much to Kael's dismay.

Kael'thas performed his duties to the best of his abilities, repairing one of the observatories. However, Kael soon found himself unable to repair the other two, as they had no boats and the nearby shipyard was destroyed. Fortunately, Lady Vashj and the Naga appeared and offered Kael some boats, which he gratefully accepted and managed to repair the remaining observatories. When word of this reached Garithos, he immediately went to Kael and reprimanded him for consorting with the snake-people. Due to his racism, he didn't trust the elves as it stood and believed the elves might betray his army.[6]

The observatories repaired by the Alliance Remnants discovered that the undead strikeforce was coming from the west. Garithos returned to the front and left Kael'thas awaiting orders. However, Garithos' emissary came to Kael's outpost, telling him that Garithos had recalled all non-elven units, leaving Kael with only his blood elves to fend off the undead coming at them.[3]

Garithos defeated the undead in the southern front easily with the forces he had amassed. However, because of his actions, he would have left Kael for dead were it not for Lady Vashj's help to defeat the undead in his area.[3]

Garithos returned and saw the naga leaving the scene. His racist-fueled words said that this was the proof he was waiting for to execute Kael and his Blood Elves.[3] He arrested Kael and his servitors and locked them in the Dalaran dungeons to await their execution, under the guard of Kassan.[8] Soon, however, Garithos heard that Kael had escaped with Vashj's help and were fleeing through a mystic portal. Garithos sent his men, armed with explosives, to destroy the portal, but the elven engineers Kael had freed used their knowledge to construct strategic defense systems. Kael and Vashj defended the portal and eventually fled themselves.[9]

Garithos, though furious, turned his attention back to the advancing undead. He pushed them back into Plaguelands, but was soon faced with the dreadlords Detheroc and Balnazzar. Detheroc's powers of mental domination made quick slaves of Garithos and his men. The human served as Detheroc and Balnazzar's pet for some time until they were attacked by Sylvanas and Varimathras. Sylvanas slew Detheroc and Garithos was freed from his bondage. Garithos was asked to join Sylvanas in the final attack on Balnazzar and he agreed, so long as Lordaeron was left to him. The banshee agreed - but secretly had no intention of keeping her word.[10]

Sylvanas launched a two-pronged attack on the Capital, with Garithos attacking from the rear as she and Varimathras attacked from the front. But, as the battle commenced, Garithos received word that the dwarven reinforcements had gotten lost in the wilderness. Garithos, annoyed at the dwarves, quickly left to find them, and brought them back to his base.[4]

With the dwarves' help, the three allies were quick to dispatch Balnazzar's forces and came upon him in the aftermath. Garithos watched as Sylvanas ordered Varimathras to kill Balnazzar. Despite their laws, which forbade the killing of another nathrezim, Varimathras did so. Garithos was lightly amused, but quickly changed his mood and ordered the duo to leave his land. Instead, however, Sylvanas ordered Varimathras to kill Garithos himself. Varimathras happily complied and cast Rain of Fire on Garithos, killing him. His corpse was later cannibalized by several ghouls.[4]

Garithos was extremely discriminant toward any of his forces that were not human, including blood elves and dwarves. He treated them very unfairly, assigning them jobs best suited to those like engineers, rather than fighters. Even though the blood elves were planning to retreat through a portal to Outland, he was willing to sacrifice countless men just to destroy it, preventing their escape in order to execute them himself.

The kingdom he was from has been unknown for a while. Some assumed he was from Lordaeron due to his quotes ("In memory of Terenas") and the fact that he seemed to have been living in the continent of Lordaeron for a long time. However, others suggested he may have been from Stormwind because he has the Stormwind banner in his shield. As there has been no concrete information, it was unknown what his kingdom was until recently.

A possible explanation was that he was once from Stormwind but chose to remain at Lordaeron after the Second War. Another suggestion was that he was sent by King Varian Wrynn to lead the Stormwind army in its fight against the scourge and that the humans who fought under his rank were Stormwind soldiers, as we can see in Chillwind Camp, the soldiers who are guarding the boarder point between the Alliance and the Scourge are Stormwind troops. However, that possibility was less likely, since Garithos acted completly independently and never seemed to be taking orders from any King.

Nevertheless, his father was ruler of Blackwood and he was born in Lordaeron, near to the border of Quel'Thalas. Thus, he was from Lordaeron and we can assume that the Lion symbol simply represents the whole nations of the Alliance - Garithos had humans fighting on his side from all the Human nations, and the troops from Stormwind who fought alongside him remained in Chillwind Camp, realising that retaking the Plaguelands was a suicide mission, offering shelter to the Lordaeron refuges instead.

Just like the Troops of the New Alliance, Garithos is hardly mentioned in the game, unlike many Human Third War Heroes such as Uther the Lightbringer, Jaina Proudmoore and Alexandros Mograine. It might be that Garithos isn't honored at all by the People of the Alliance, most likely because of his corrupt and racist leadership, and possibly because of his treatment and imprisonment of the Blood elves during the retake and defense of Dalaran. When the Blood elves officially joined the Horde, many of the Humans of Stormwind blamed Garithos for causing them to leave the Alliance, which made the Alliance lose strategic allies [citation needed]. Garithos doesn't have a tomb, since his corpse was eaten by Forsaken Ghouls.

GARITHOS: You are late, Prince Kael'thas. I thought you elves prided yourselves on punctuality.

KAEL: It could not be helped, Lord Garithos. We ran into a group of night elves from across the sea, and --

GARITHOS: I am not interested in your fanciful excuses! You elves are here to serve the Alliance: thus, you will obey my commands to the letter! Is that clear?

GARITHOS: Now, the undead have begun a new offensive to retake Dalaran. Their primary strike force marched south through Silverpine, but we managed to halt its advance at the base of the mountains.

KAEL: My men are ready to fight, milord! When shall we leave for the front?

GARITHOS: We will be leaving immediately. But your people will be staying here. Our scouts report that a second strike force may be heading this way from the east. I need you to repair the outlying observatories so that we can monitor that region.

GARITHOS: You have your orders, Prince Kael'thas. I trust your elven ears heard them clearly enough. Move out!

KAEL: Insolent son of a... Let's get this over with!

"I never trusted you vainglorious elves. It was a mistake to accept you into the Alliance in the first place. Now, at long last, you'll be dealt with appropriately. Take them away!"

GARITHOS (to Sylvanas and Varimathras): There, your business is done. Now, I want you wretched animals out of my city before I--

SYLVANAS: Kill him, too.

I hate working with these... people.

We humans have to stick together.

Humanity is in peril.

In the memory of Terenas!

These inhuman dogs must be slain.

The lesser races must be purged from the kingdom. 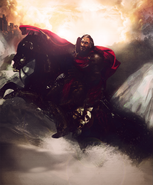 Fanart of Garithos by Ralth.
Add a image to this gallery

Retrieved from "https://wowwiki.fandom.com/wiki/Othmar_Garithos?oldid=2862773"
Community content is available under CC-BY-SA unless otherwise noted.