Northern Durotar [46, 12]
Orgrimmar[46, 12] is the seat of power for the Horde and the capital city of the orcs, but also has many trolls and other members of the Horde. Found at the northern edge of Durotar, the imposing city is home to the Warchief of the Horde,

Sylvanas Windrunner. As with all capital cities, it has a bank, class, profession trainers, and an auction house.

The city was attacked by the Scourge during the duel between Thrall and Garrosh. The duel had to stopped as orcs and some others leaders of the Horde went to defend the city.

During the War against the Lich King, Putress betrayed Forsaken. Sylvanas and her loyal Forsaken took the refuge in Orgrimmar. From there, Sylvanas, Thrall and horde adventurers returned and liberated Undercity. During that time, all merchants and services have been shut down as the Warchief prepared for an unavoidable conflict.

As whole Azeroth fell into the mists of Emerald Nightmare, so did Orgrimmar with its citizens.

Orgrimmar was attacked by raging elements but the attack was successfully repelled.

After the War against the Lich King and War against the Nightmare were over, a great celebration was held in honor of Garrosh and those who died and survived on Northrend. Nevertheless, raging fire elements burned plenty buildings in Orgrimmar and the city needed to repair. Thrall asked Gazlowe to do so and determined to set off to Nagrand in order to help raging elements. Before leaving, in Grommash Hold Thrall appointed Garrosh to lead the Horde.

With the Cataclysm over and the threat of Deathwing subsided, a summit of the Horde's leaders was held in Orgrimmar. Here, Garrosh informed his allies about his desire to forcibly expel the Alliance from Kalimdor, and claim the continent for the good of the Horde. Garrosh intended to scour Theramore from the continent, and stunt the Alliance's military presence. With that done, he then aims to take the night elves' land.

After the successful destruction of Theramore, the battle force returned to Orgrimmar to celebrate their victory. Many cheers rose to Garrosh's victory.

Over the course of Mists of Pandaria, Garrosh becomes increasingly crazed and tyrannical, turning the Horde against him and Orgrimmar changes to reflect this.

Orgrimmar is effectively put under martial law, as Garrosh continues to opress the non-orc members of the city. All non-orc districts of the city lose most of their supplies and are heavily guarded by the Kor'kron, under suspicion that they might be WORKING with the rebels. The supply lines to Orgrimmar from the Northern Barrens are cut off and Vol'jin has taken the strategic settlement of Razor Hill from Garrosh's loyalists, essentially putting the city under threat of siege from the rebellion to the south as well as the Alliance armada amassing to the east.

During the Siege of Orgrimmar, the city is put under siege by the forces of the Horde rebels and the Alliance. Kor'kron barricades block access to most of the city's districts. Vol'jin's revolutionary forces have entrenched themselves along the main road, launching a frontal assault on the city's gates to break into the Valley of Strength. Alliance frigates storm the Bladefist Bay and landing parties attempt to capture the docks around Orgrimmar. Invading forces discover a massive underground compound constructed by Garrosh's forces for his own purposes. Skirmishes at the gates occurred before a full-scale battle erupted between the forces led by Vol'jin and the defenders still loyal to Garrosh. Despite Vol'jin's attempts to ram the gate and attack the walls with siege engines, the walls could not be breached. The arrival of a combined rebel and Alliance armada under the command of Lor'themar Theron,Varian Wrynn, Jaina Proudmoore, and Sylvanas Windrunner disabled Orgrimmar's naval defenses. Eventually the Kor'kron were pushed back into the gates and the arrival of Night Elf reinforcements under Tyrande Whisperwind. Night Elf glaive throwers brought the gate down, and the allied forces charged into Orgrimmar. The Valley of Strength was quickly liberated, and the death of General Nazgrim brought the upper city under Alliance/rebel control. The Underhold eventually fell when adventurers defeated and imprisoned the Warchief Garrosh. Vol'jin was quickly nominated and initiated as the new Warchief by Thrall and the other Horde leaders. Alliance forces left the city, and the rebels began rebuilding the damage that was done during the siege. 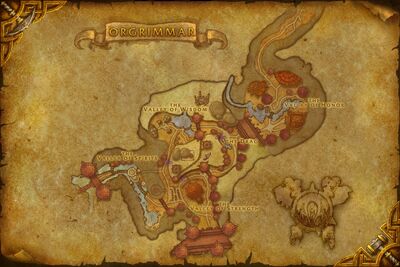 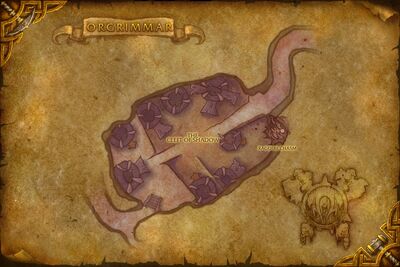 Shops and other areas of note

Shops and other areas of note, Cleft of Shadow

The Cleft of Shadow 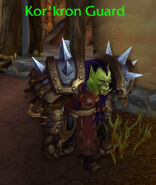 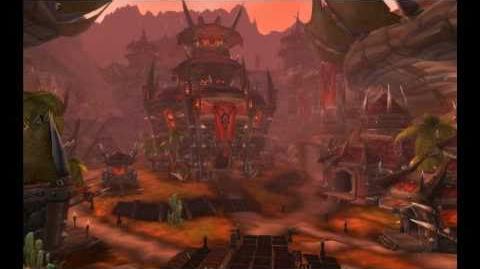 Retrieved from "https://wowwiki.fandom.com/wiki/Orgrimmar?oldid=2848195"
Community content is available under CC-BY-SA unless otherwise noted.