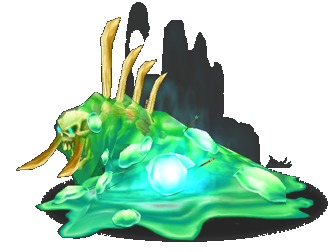 An ooze is an amorphous or mutable creature, usually mindless. They are also blind. Some oozes have the ability to deal acid damage to objects. Oozes "eat" but do not require air or sleep or anything to maintain a normal creatures life. They eat because they can, that is all they know.[1] (MG 196)

Most Oozes are elementals that have fallen to corruption via fel magics or the power of the Old gods in mass quantity. Most likely they are earth elementals, as fire, water, and air elementals infected by fel or the Old gods tend to look like themselves but are green or purplish. They are "living" sludgy masses with only a few functions. Kill, absorb, and move.

There are many various types of oozes and colored oozes. The basic forms of oozes are as follows; Skeletal oozes as seen to the right, Bubble Oozes, (where they look like a bubble blob with air bubbles inside of them, and face oozes.

The face oozes are an interesting type. They have two eye like sockets and a gooey evil looking "mouth" that can't do anything but be there. They can not see in our sense, and yet they approach their prey with their face pointing in the direction they are going. That is not yet known why but it is assumed face oozes are somewhat more sentient than other oozes, though if so, it is a minimal increase in intelligence.

How oozes truly gain their ability to do anything is a mystery, however, in spite of their less than good beginnings, it is speculated that the Life Magics coming from Azeroth gives these creatures life. Just like the Well of Eternity, also known as the life blood of Azeroth herself, brought the first trolls and the giant insect race known as the Silithids to life.

Oozes are made of many different things, a quick list goes as follows:[citation needed]

Oozes are living blobs of slime that consume all that they touch. Oozes inhabit many places in the world of Azeroth, from Ironbeard's Tomb in the Wetlands to Maraudon in Kalimdor.

One of theory of their origin is that oozes are tied to the creation of the planet, as if they were a secretion of it. Chemist Fuely suggests that oozes may be connected to the Old Gods, a theory supported by the presence of Viscidus, a large ooze, in C'Thun-controlled Ahn'Qiraj (

[56] ... and a Batch of Ooze). Another theory classifies oozes as magically-created beasts intended to keep empty dungeons and underground sewers free from rats, roaches and possible invaders - magicians would conjure oozes as guardians of such places.

In Night of the Dragon, a group of dwarves encounter an ooze in the Wetlands. The creature is attacked by one of the dwarves, but as the dwarf's weapon sinks into the ooze, the dwarf is sucked in. The dwarf is quickly dissolved before his fellows' eyes.

Oozes (subspecies include slimes, primal oozes, black oozes, sludges, or sludge beasts) generally consume anything they move over, and have been known to consume small mammals and even gnomes. As such their bodies are usually peppered with items that they can not digest such as bones, arrow heads or the odd piece of armor. Though it is somewhat counter-intuitive, rogues can pickpocket oozes. Because oozes so readily absorb everything around them, they tend to closely reflect their environment. For instance, oozes and slimes that live in areas tainted by the Blight, often have the ability to pass on terrible diseases to those they attack. The most "pure" oozes that haven't soaked up too much foreign material are located in Un'Goro Crater.

This section concerns content that is out-of-date. Reason: No expansion locations.

Retrieved from "https://wowwiki.fandom.com/wiki/Ooze?oldid=2811245"
Community content is available under CC-BY-SA unless otherwise noted.