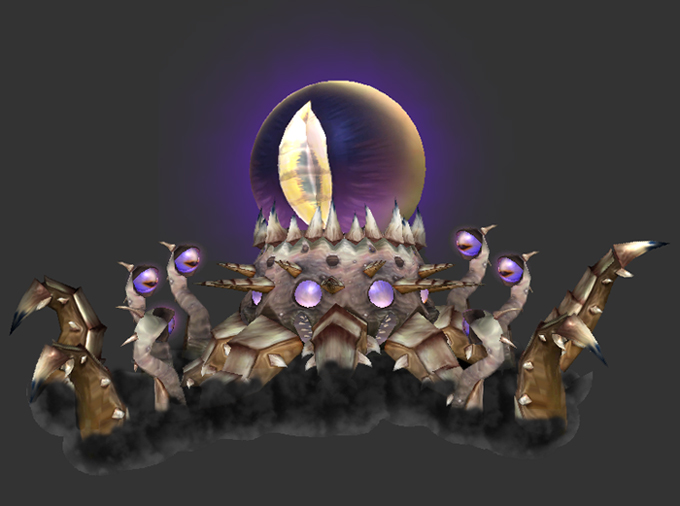 The Old Gods were malevolent deities who ruled Azeroth in the ancient past before they and their Elemental Lieutenants were defeated by the Titans. Very few mortals know of the Old Gods, fewer still consider them anything more than a legend. The malign Old Gods - colossal beings of elemental fury - once ruled the world and the savage elementals that dwelt upon it.[1] (WRPG 155)

Long ago, Azeroth was a primordial world filled with the hostile elemental servants of the Old Gods. When the Titans visited the world in their quest to bring order to the universe, they fought first against the Old Gods' lieutenants who were the elemental gods of Azeroth and the source of the elementals themselves, Ragnaros the Firelord, Therazane the Stonemother, Al'Akir the Windlord, and Neptulon the Tidehunter, then against the Old Gods themselves. Soon, the Titans defeated the Old Gods, then chained the raging beings beneath the earth where supposedly, they remain to this day.[1] (WRPG 155) Then set about the long process of forming the lands and seas of Azeroth.

Of the five initial Old Gods, it is believed that at least two have been slain; their remains can be seen at the Master's Glaive in Darkshore. One or more is believed to have been buried in the Valley of Bones.

The quest giver Onu makes this reference to the Master's Glaive being and old lord and the RPG also mentions that its believed to be an Old God. Brann Bronzebeard speculates that a Titan killed one of the Old Gods here, or its one of their minions.[2] (LoM 12)

The three Gods imprisoned beneath the earth continued to exert their will, though in limited ways.

C'Thun is the only one of the Old Gods to be named so far, having received that name from his servants, the Qiraji. He was defeated in Silithus in a battle which also resulted in the defeat of a Titan. C'Thun was believed to have been permanently defeated, but reemerged as the driving force behind the Qiraji. He is trapped deep beneath the ruined temples of Ahn'Qiraj, where he has exerted his will for thousands of years over the Qiraji, who in turn command the Silithid.

C'Thun is the final boss in the Temple of Ahn'Qiraj.

Ula-tek is believed to be a bonafide Old God.

Some believe that Ragnaros was not only one of the Elemental Lords but one of old gods himself, such as the Dark Iron dwarves.[4] (LoC 191)

The ancient and powerful evil is a creature of C'thun's race, being summoned by the arakkoa. Perhaps another Old God.

The Forgotten Ones are implied to either be Old Gods or a spawn of the Old Gods.

In a blue post on the forums, it was stated that the Nerubians are "followers of the Old Gods in Northrend." This implies that we will be seeing another Old God in Northrend - indeed, if we pay attention to the pluralization, more than one Old God.

The Number of Old Gods Imprisoned

There are various sources as to the number of Old Gods imprisoned:

Retrieved from "https://wowwiki.fandom.com/wiki/Old_Gods?oldid=836612"
Community content is available under CC-BY-SA unless otherwise noted.