Were you looking for the ogre in Dustwallow Marsh named 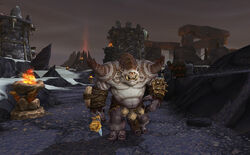 The ogron are a race of giants that once lived on Draenor. These creatures were all wiped out during the time of Draenor's destruction and forming of the original Horde.[1]

Ogres, gronn, and magnaron all share a common lineage, with the beastly ogron demonstrating the missing link between savage gronn and their smaller, more numerous children. They take in their surroundings with a single yellow eye—slow to blink and even slower to comprehend. Too idiotic to disobey orders, but big and dangerous enough to keep even unruly ogres in line, ogron serve as expendable muscle for ogre leaders from warlords all the way up to the emperor himself. Any champions seeking to overthrow ogres in power had best prepare to face down one or more ogron towering in their way.

In the Warlords of Draenor expansion, the ogron still exist in the alternate timeline of Draenor.

Retrieved from "https://wowwiki.fandom.com/wiki/Ogron?oldid=2783008"
Community content is available under CC-BY-SA unless otherwise noted.