Obsidia is a black dragon, initially encountered by players as she flies over the Vortex Pinnacle[34, 54] in Blade's Edge Mountains. She can be called down to fight as part of the Ogri'la series of quests, or at any time by opening Obsidia's Egg at Obsidia's Perch (requires 35 [Apexis Shard]s). When summoned, she lands and attacks the party. She also appears in the Obsidian Lair[55.6, 83.7] in the Twilight Highlands, described as one of the last black dragons capable of breeding.

A balanced 5 man should have no trouble with this mob, although she seems to have a fair amount of health.

Really, while the fight could generally be unpleasant due to her range of abilities, her damage output is so paltry, generally she can't kill much of anything even if the tank is feared. You can use a warlock or such to tank her, if you have decent healing.

Obsidia is summoned during the below quest. Baleflame assists players in the fight, serving as a tank. 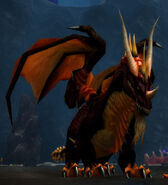 Obsidia in the Obsidian Lair
Add a image to this gallery

Retrieved from "https://wowwiki.fandom.com/wiki/Obsidia?oldid=2856061"
Community content is available under CC-BY-SA unless otherwise noted.