The Night Elves are one of the playable races in World of Warcraft. They start in Shadowglen, an area located inside the great tree Teldrassil.

For the Alliance, the druid class was exclusive to the Night Elves until the addition of the Worgen in World of Warcraft: Cataclysm.

For ten thousand years, the immortal night elves cultivated a druidic society within the shadowed recesses of Ashenvale Forest. Then the catastrophic invasion of the Burning Legion shattered the tranquility of their ancient civilization. Led by the Arch-Druid Malfurion Stormrage and the High Priestess Tyrande Whisperwind, the mighty night elves rose to challenge the demonic onslaught. Aided by the newly arrived orcs and humans, the night elves succeeded in halting the Legion’s advance and defeating its master, the demonlord Archimonde. Though victorious, the night elves were forced to sacrifice their cherished immortality and watch their beloved forests burn.

In the aftermath of the horrific conflict, Malfurion and Tyrande helped their people rebuild their shattered villages. Slowly the night elves began to adjust to their mortal existence. Such an adjustment was far from easy, and there were many night elves who could not adjust to the prospects of aging, disease, and frailty. Seeking to regain their immortality, a number of wayward druids conspired to plant a special tree that would reestablish a link between their spirits and the eternal world. When Malfurion heard about this plan, he warned that nature would never bless such a selfish act. Shortly thereafter, Malfurion’s spirit was somehow lost within the depths of the Emerald Dream. Though his fellow druids attempted to find his wandering spirit, only his body remained sleeping within his Barrow Den.

With Malfurion missing, Fandral Staghelm – the leader of those who wished to plant the new World Tree – became the new Arch- Druid. In no time at all, he and his fellow druids had forged ahead and planted the great tree, Teldrassil, off the stormy coasts of northern Kalimdor. Under their care, the tree sprouted up above the clouds. Among the twilight boughs of the colossal tree, the wondrous city of Darnassus took root. However, the tree was not consecrated with nature's blessing and soon fell prey to the corruption of the Burning Legion. Now the wildlife and even the limbs of Teldrassil itself are tainted by a growing darkness.

As one of the few night elves still left in the world, it is your sworn duty to defend Darnassus and the wild children of nature against the Legion’s encroaching corruption.[1] (WOWMan 177)

Recent Horde attacks have seized night elven lands in Ashenvale, while areas along Kalimdor’s western coast have been decimated by the catastrophic upheavals unleashed in the wake of the Cataclysm. Still struggling to cope with the loss of their immortality, the night elves must prepare to stand against any threat as Azeroth itself breaks apart at the seams.[2]

From in-game video of

Classes that don't start at level 1.

Surprise is at the heart of kaldorei battle tactics. A typical attack consists of a group of Sentinels staying hidden, melding with the shadows around them, making a rapid strike, and then disappearing before the enemy can respond. This Elusiveness makes rogues and Druids of the Claw even more stealthy than their counterparts of other races. When an enemy does strike at a night elf they will find that her natural reflexes and Quickness make her difficult to hit.

Night elves live alongside nature rather than pushing it away. This way of life gives them a slight resistance to the elements and to chemical attacks like poisons.

Wisp Spirits wander the forests of Kalimdor and sometimes aid the night elves in construction and gathering. According to legend, these forest lights are the ghosts of dead kal'dorei.

Night elves have a long tradition of druids, hunters, priestesses, and warriors. Although not openly acknowledged, night elf rogues have long served in the shadows for both good and ill purposes. Later as with many races who encountered the Scourge, night elves were raised and served the Lich King for long years until some of the elite warriors in his service became free Death Knights. Finally the events of the Shattering have led some night elves to return to the ways of the arcane and reclaim the forbidden powers pursued by the Highborne.

Warrior - For thousands of years, night elves have trained the most courageous Elven women to serve their people as elite guards and soldiers, most often called Sentinels. However, not all Sentinels stick to melee. The favored Sentinel weapon of war is a Moonglaive.

Rogue - Night elves are extremely adapted to shadowy environments with their dexterity and nimbleness. Thus, many night elves favor the path of the Rogue, in which they serve as excellent scouts, delving deeper into enemy lines then any other race could ever hope to achieve.

Hunter - In addition to their agility, night elves have almost unmatched skill in trekking through their forested lands and the art of marksmanship. Many of these gifted Elves also join the Sentinels, serving as the scouting elite and archers during times of war.

- Thousands of years ago, when the night elves toyed with the unpredictable and dangerous heights of Arcane magic, the night elves had an elite sect of sorcerers known as The Highborne, who were easily some of the most powerful mages in history. After the War of the Ancients many Highborne were exiled to Quel'thalas, but some remained in Dire Maul as servants of The Shen'dralar. Many of these elves forsook the night and turned to the sun, becoming the quel'dorei or high elves. Recently, after witnessing the Cataclysm, some of these powerful beings contacted their kin, the kal'dorei (night elves), and now seek to repair the relationship with their kin by lending their magical prowess and Reforging to both the kal'dorei and the Alliance.

Priest - For countless years, the night elves have practiced the arts of the Priest as the Priestesses of Elune (It was strictly known that only women could become priests) in worship to their deity, the Goddess Elune. Recently, due to the previously male-only Druids welcoming Women, the Sisterhood decided to open their organization to men as to keep balance.

Druid - During the aftermath of the destruction of the Well of Eternity The kal'dorei rejected the dangerous secrets of the Arcane and began practicing nature magic, mostly Druidism, to protect the world they had almost obliterated, due to Cenarius, the demigod of nature, taking on Malfurion Stormrage as his first mortal apprentice on Azeroth. Then, Malfurion turned to teach his own people the Druidic ways and soon the kal'dorei became the icon of druidism. Originally, only men could become Druids due to the rules of the Elves, but recently, due to the waning numbers of druids after the costly Third war, women were gradually accepted into the Brotherhood of Druids.

Death Knight - Like many other heroes of the Alliance and Horde, Night Elven champions were killed by the Scourge during the War in Northrend and raised into undeath as servants of the Lich King. However, some elves (player-created Death Knights) were among those who were freed from his grasp in Light's Hope Chapel and became Knights of the Ebon Blade. 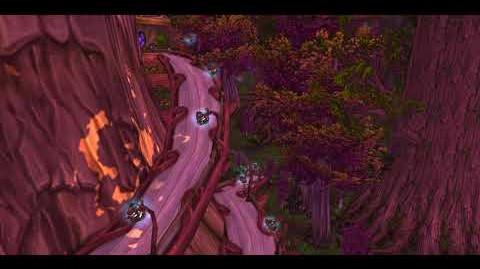 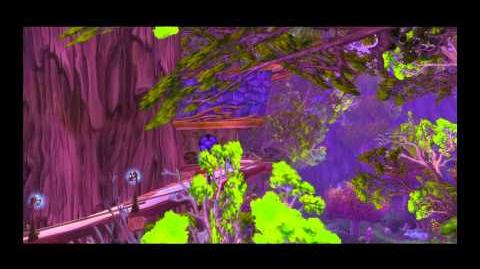 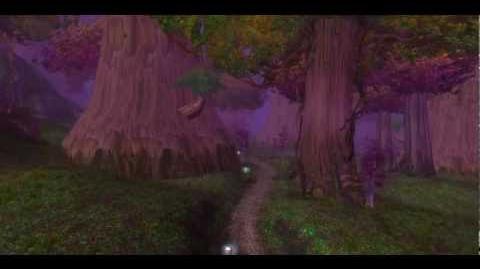 Retrieved from "https://wowwiki.fandom.com/wiki/Night_elf_(playable)?oldid=2850301"
Community content is available under CC-BY-SA unless otherwise noted.