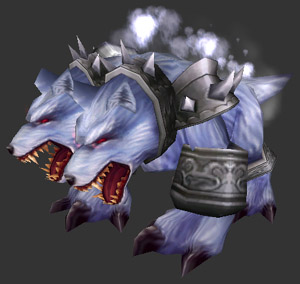 A nian is a huge, two-headed, dog-like beast. Interestingly, nians seem to be both beasts and demons, though Omen likely used to be a beast when he was an Ancient, but was corrupted into a demon.

In Chinese mythology, the Nian was a beast that comes in the spring. It is believed that it lives under the sea or in the mountains and comes to attack people during midnight at the same time of the year. People then discovered that the Nian was afraid of the color red, bright light, and loud noises. Therefore, during that time of the year when the Nian comes, people decorate their houses in red, burn firecrackers, and play the Lion Dance with loud drums and gongs to scare the beast away. Eventually, these acts became traditions repeated every year. Also, the Chinese word for year is the same as the name of the beast. A phrase for Chinese New Year, "Guo Nian", means "Passing of the Beast". The creature Omen in World of Warcraft seems to be inspired by the Nian as it appears only during the time of the Lunar Festival.

The name "Nian" is taken from the game files, as no other name is known.

Retrieved from "https://wowwiki.fandom.com/wiki/Nian?oldid=1798449"
Community content is available under CC-BY-SA unless otherwise noted.