"The Nexus" redirects here. For the 5-man instanced dungeon, see The Nexus (instance).

The Nexus is the name of a dungeon in World of Warcraft (as well as the first instance of the same dungeon). It is an ancient ice fortress found in the center of Coldarra, an island in Borean Tundra. It is a "column of magical energy surrounded by levitating earth-covered rings"[1] with ice caves underneath.

Originally the exclusive domain of Malygos, the Aspect of the blue dragonflight, the Nexus has expanded considerably as other blue dragons choose to live near their leader and partake of his wisdom. The Nexus is an extensive series of caves and tunnels that riddles Coldarra. Every space has been carved and smoothed so that it seems more like a castle buried in ice than a natural formation. The walls are ice and crystal, and cast rainbows of light from small glowing gems set in strategic locations; most flat surfaces are carved to show dragons in various activities. The floors are solid stone, polished glass-smooth and mirror-bright. No stairs exist — in many places an archway opens onto a vast open chamber and the dragons simply fly across to another portal placed somewhere on the other side. The outermost chambers are dotted with lifelike ice statues — the statues are the remains of uninvited guests, transformed by dragon magic and placed here as a warning. The caves themselves are fascinating, and many have unusual magical properties, some of the rooms may actually change.[2] (LoM 96)

The Nexus is a dungeon in Northrend contained in the World of Warcraft: Wrath of the Lich King expansion. At the Games Convention, Tigole confirmed that there will be two 5-man dungeons and a raid where you encounter Malygos.[3] To enter the instance before level 77 players must first do a quest line for a red dragon who then flies you to the entrance.[4]

There is composed of:

From the official site

The Nexus War has begun.

The blue Dragon Aspect, Malygos, was charged ages ago by the titans as the guardian of magic. More than ten millennia ago, he watched in horror as Deathwing all but wiped out the blue flight. Maddened by grief, Malygos withdrew to his lair and paid little heed to the rest of the world, emerging only when it finally seemed possible to avenge Deathwing's terrible crime.

Only in recent times did Malygos fully return to his senses. Upon reviving, he quickly assessed the state of magical affairs in Azeroth and reached the grim conclusion that magic was running amok throughout the world. He blamed this dangerous development on the mortal races and their reckless pursuit of magical power.

Determined to forestall a catastrophe, Malygos decreed that the world's unbridled magic must be reined in by any means necessary. And so the great Aspect turned to the Arcanomicon, a map of the world's ley lines. Gifted to Malygos ages ago by the titan Norgannon, the Arcanomicon has been continuously updated and revised by the blue dragons over the long years of Malygos's seclusion.

Now Malygos uses the Arcanomicon to locate and tap into the ley lines, diverting the magical powers that course beneath the earth to his home base in Northrend, the Nexus. Once harnessed, the energies are focused through the Nexus' ascending rings and blasted into the Twisting Nether. Malygos's redirection of the ley lines has carried disastrous consequences, however, splintering the world's crust and opening unstable rifts: tears in the very fabric of the magical dimension.

Malygos' siphoning of the world's magic has not gone unnoticed by the mortal races. The weakening members of the Kirin Tor, the elite magi of Dalaran, have sworn to fight Malygos to the bitter end. In fact, the magi have used their waning powers to transfer the entire city of Dalaran to float above Northrend. From this vantage point, the magi prepare for the next step in their battle against the Lich King, and for the inevitable confrontation with Malygos.

However, not all of the Kirin Tor stand united. Several members have opted to side with the blue dragonflight in the hopes of retaining power. Transformed and bolstered by Malygos, these mage hunters are tasked with rooting out and, if necessary, destroying magical artifacts; killing or imprisoning individuals who practice magic without Malygos' permission; and aiding in the redirection of ley lines using massive constructs called surge needles.

The blue dragonflight's increasingly militaristic methods have been condemned by the red dragonflight. Charged with the preservation of life, the red dragonflight has vowed to neutralize Malygos at all costs. To this end, they have formed a council with the Kirin Tor, and the two groups have begun actively subverting Malygos's devastating campaign.

The sides have been chosen; the battle lines have been drawn. The only question that remains now is...

A room in The Nexus 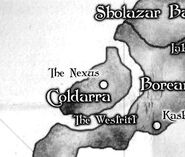 Location of the Nexus