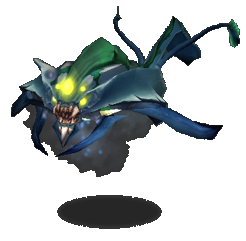 The nether ray is a beast native to Outland. It has a body much like a stingray's (thus the name) with a long tail and two feathery plumes. It has crystalline growths and stripes running down its body, and all types are brightly colored. It is possible to mistake a nether ray for a spore bat at a passing glance, and that mistake could prove costly.

While not especially large as a whole, at least one titanic specimen has been allegedly spotted by adventurers in Zangarmarsh, dubbed "Count" Ungula. The Cenarion Expedition would be interested in proof of the creature's existence.

Nether rays have been found in Netherstorm, Zangarmarsh, and Shadowmoon Valley and are tamable as hunter pets.

Nether rays have a unique way of achieving flight, their "wings" being tiny in comparison to other flying animals. They use the special gland on their underside to excrete spores that produce lighter-than-air gas. This gas produces a pocket under the ray that keeps it afloat, and the ray uses its "wings" to keep the gas pocket under its body. To achieve propulsion, the ray uses its "wings" to squeeze the gas towards its tails, where it streams the gas with its two feather-like tails, and undulates its third paddle-like tail through the stream, giving the nether ray added lift and propulsion. Since the nether ray uses gas to counteract gravity instead of "fighting" against it using lift, it is able to perform just as well as other flying animals, despite its small size.[citation needed]

Though hunters can respec their pet nether rays into Ferocity or Tenacity, they are inherently Cunning. In addition to the abilities that come standard with all pets ([Growl] and [Avoidance]) and those given to their natural or retrained specialization, all nether rays are given the following:

Nether rays are a purchasable flying mount. It requires Exalted with the Sha'tari Skyguard faction and a riding skill of 300 to use them.

Retrieved from "https://wowwiki.fandom.com/wiki/Nether_ray?oldid=2742149"
Community content is available under CC-BY-SA unless otherwise noted.