Nerubians are an ancient race of intelligent arachnoids native to Northrend within the kingdom of Azjol-Nerub.

At the ancient continent Kalimdor's center was a mysterious lake of incandescent energies, the Well of Eternity. It was the true heart of the world's magic and natural power. From this magical ether the silithid were born. As the fallen Old God C'Thun recognized their appearance, he attempted to sunder the world that it once held in its unmerciful grasp. The Old God created avatars from the silithid in its own image. These avatars were to be known as the qiraji.

The aqir ruled the lands of the far west. These clever insectoids were greatly expansionistic and incredibly evil. The aqir were obsessed with eradicating all non-Arthropod life from the fields of Kalimdor. So the two big troll empires of Gurubashi and Amani found their common enemy in the third empire — the nation[2] (DF 43) of Azj'Aqir.

The trolls fought them for many thousands of years, but never succeeded in winning a true victory over the Aqir. Eventually, due to the troll's persistence, Azj'Aqir split as its citizens fled to separate colonies in the far northern, western and southern regions of the continent.

Three aqir city-states emerged — Azjol-Nerub in the northern wastes, Ahn'Qiraj in the western desert and another group to Dread Wastes in the far south. The aqir that traveled north discovered and overthrew a Tol'vir society, enslaving some of them. These aqir would eventually become the race we know as the Nerubian today, having adapted the tol'vir's architecture for their own purposes. the new empire of Azjol-Nerub that stretched like a great web beneath the desolate glaciers of the land later known as Northrend was founded.[3]

Unlike their relatives, they refused to worship the Old Gods and they even fought with their other servants like the Faceless ones. The reason why they did this was never known.

War of the Spider Edit

Thousands of years later when the Lich King extended his influence over Northrend, the shadowy empire stood against his power. The ancient subterranean kingdom of Azjol-Nerub sent their elite warrior-guard to attack Icecrown and end the Lich King's mad bid for dominance. Much to his frustration, Ner'zhul found that the Nerubians were immune not only to the undead plague, but to his telepathic domination as well.

The nerubian spiderlords commanded vast forces, and had an underground network that stretched nearly half the breadth of Northrend. Their hit-and-run tactics on the Lich King's strongholds stymied his efforts to root them out time after time. Ultimately, Ner'zhul's war against the nerubians was won by attrition. With the aid of the sinister dreadlords and innumerable undead warriors, the Lich King invaded Azjol-Nerub and brought its subterranean temples crashing down upon the spider lords' heads. The nerubian empire had now fallen for a second time.[4] (MG 22)

Though the nerubians were immune to his plague, Ner'zhul's growing necromantic powers allowed him to raise the spider-warriors' corpses and bend them to his will. As a testament to their tenacity and fearlessness, Ner'zhul adopted the nerubians' distinctive architectural style for his own fortresses and structures. Though there are few pockets of nerubian warriors left, they still seek to gain vengeance upon Ner’zhul and reclaim their subterranean kingdom.[5]

During the war, a Nerubian Spiderlord by the name of Vorus'arak led his brood under ground. A great tunneler, the Swarm Lord and his people dug, forced to eat their young for food. They eventually found an island, the Skittering Hollow, where they made a home for themselves. This group became the Voru'kar.

Now, the nerubians are a depleted and embittered people. Most live in Northrend and shun all contact with outsiders — indeed, they attack intruders on sight, viewing all creatures not of their kind with suspicion. Understandably, they possess a vitriolic hatred of undead, especially crypt fiends and crypt lords. They realize that they are too weak to overthrow the Lich King, and must content themselves with their pathetic guerrilla war.[2] (DF 44)

However, now in the leadership of Unseen Emperor(presumed to be Seer Ixit)and after the death of Anub'arak and the lich king, Nerubians are taking help from mercenaries to cleanse their cities of Scourge's presence so that they can finally began repopulating their people and start rebuilding their Empire. There are few groups of living nerubians, Azjol-anak, Nerubians of Sundered Monolith And Nerubians known as the Voru'kar led by the living spiderlord Vorus'arak who currently resides within the skittering hollow.

Mael Shelub, a living nerubian necromancer traveled south and worked with (but hated) the Forsaken Blarus Whitrick to defeat the Scourge in Silverpine Forest.[6] (LoC 143)

This section concerns content exclusive to Wrath of the Lich King.With the death of their former leaders, the nerubian viziers have risen to power. They serve an "unseen emperor", one who is destined to lead the ancient spider-people to a final victory over the Scourge.[7] This does not seem to be touched upon in WotLK.

In the quests The Faceless Ones and Proof of Demise: Herald Volaz, Kilix the Unraveler and Archmage Lan'dalock say that as the nerubians fought the Scourge, they dug deeper underground as they lost ground to the undead. "We inadvertently exposed a tendril of the Old God's will, which was made manifest in the creatures known only as the Faceless." He then goes on to say that they lost the war because "In the end, we could not fight on two fronts against such powerful enemies. Our misfortune cost us the war against the undead, and ultimately, our home." implying that the nerubians discovered the faceless ones by accident.[8]

This section concerns content exclusive to Cataclysm.It is revealed that the nerubians have an enormous secret stash of their own eggs hidden safely, so that after the wipe out of the Scourge from Azjol-Nerub And the death of the Anub'arak, they can finally begin repopulating their people.

This section concerns content exclusive to Battle for Azeroth.Skittering Hollow, home to the Voru'kar, was visited by Alliance and Horde forces seeking Azerite. It is possible for them to fight members of the brood, as well as Vorus'arak. His carapace, revealed to have never been shed since the War of the Spider, is returned to Northrend to Kilix the Unraveler, claiming that the history of the nerubians are important to them before rewarding the Adventurer with Azerite.

Kel'Thuzad claims that they were fiercely intelligent, and their will dedicated to wiping out any who were not like themselves.[10] Much like the aqir.

Nerubian culture may place great store in longevity; Nerubians encountered at the Sundered Monolith told Brann their ages, and they seemed impressed by his.[11] (LoM 146)

Legends tell of the nerubians' using the jormungar as creatures of labor, forcing them to carve massive tunnels through Northrend's subterranean ice and lay the groundwork for the nerubians' ancient civilization.[12]

Nerubian culture resembles the ancient Egyptian and Mesopotamian culture in terms of their architecture, though the ziggurats are of a completely different design.

As attested by many traps and contraptions in Azjol-Nerub dungeons, they were once good engineers.[13]

The Nerubian architectural style was adopted by the Lich King after the War of the Spider[14] and so Ziggurats, the big Necropolises Naxxramas and Acherus refer to their building style. Of course most of the architecture can be seen in Azjol-Nerub itself. Another good example for their style is the statue in the Pit of Fiends.

The Nerubians had a complex social organization, like ants or bees. The function of each individual was predetermined by genetics, as well by the subspecies they belonged to. Different types of nerubian are referred to as castes with a life-long occupation and responsibility in society. Seers, for example, are relatively high-level nerubians who act as priests and mages. Spider lords are the rulers of the society in the same mold as the aristocracy of humanoid races.[9] (MoM 69) The colonies were headed by a Nerubian queen who was responsible to giving birth to new Nerubians. The queens wielded great power, although in most cases they shared it with Spiderlords (a subspecies that bears more resemblance to beetles than to spiders, which are born from a litter of 20 egg sacks laid by a queen ) and the Nerubian viziers (another subspecies with preference for magic), acting as special advisors to their queen. There was also a Spiderlord reigning over all the Nerubians, and whose main function was coordinate the Nerubians colonies through its queens. He also should provide protection to them.Most of the spiderlords, and the last king of the Nerubians, Anub'arak, were killed and later resurrected by the Lich King after the War of the Spider, and they became Crypt lords of the Scourge. At the bottom of society were the Nerubian workers who performed various tasks. Workers who showed unusual physical abilities became warriors; workers who showed mental talents became seers, and those who demonstrated exceptional weaving skills became Nerubian webspinners.

The spider is the most common motif of the nerubians, and they have appeared to have evolved at least partially into an arachnid race (eight limbs) from an insectoid race (six limbs). Despite the nerubian cultural association with spiders (who reproduce through any male and any female), they reproduce as social insects do, through queens.

Undead nerubians are usually under control of the Scourge and are known as crypt fiends (in the case of most nerubians) and crypt lords (undead spiderlords). Too few crypt fiends appear in Azeroth, so nobody knows yet what nerubian females look like or are called.

Nerubians tend toward evil; they have always been ruthless and aggressive, and since the fall of the Spider Kingdom these traits are more pronounced. Still, nerubians are intelligent, and not all fall into dark ways. They may join a group of adventurers in the hopes of striking against the Lich King, or of gaining the power to do so. Other nerubians, often young ones, leave their homes because they want no part of their people's hopeless conflict and desire to become more than embittered survivors — perhaps they want to attain, at an individual level at least, the heights their people once possessed. The remote possibility exists that a handful of nerubians are not evil and could get along with other races better than their brethren.[2] (DF 44)

Nerubians speak Common and Nerubian. Nerubian is both a spoken and a sign language.[9] (MoM 69) Many nerubians are fluent in Common as well as their own tongue (a clicking rasping language).[11] (LoM 144)

In ancient Azjol-Nerub, there were five or six schools of religious thought, and theological debates were common. Eventually, however, nerubians have come to a conclusion that worshiping creatures from beyond the world is insane, and, in the words of the seer Ul'Tomon, "makes as much sense as a fly caught in a web worshiping the spider who is about to devour him". To modern nerubians, even the concept of "worship" itself is alien. [11] (LoM 143)

A nerubian as seen in Warcraft III. 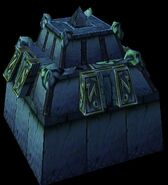 Nerubians lived in or drew power from Ziggurats in Warcraft III.

A nerubian building. A hint of qiraji style can be seen. 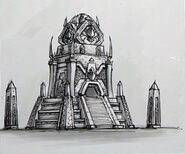 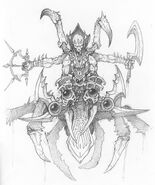 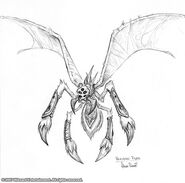 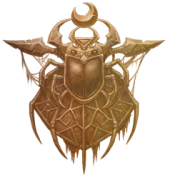 Nerubian Crest (as seen in archeology) 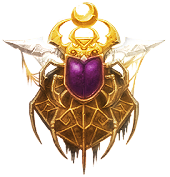 A Nerubian Warrior From Warcraft 3

A Nerubian Queen from Warcraft III

Retrieved from "https://wowwiki.fandom.com/wiki/Nerubian?oldid=2860405"
Community content is available under CC-BY-SA unless otherwise noted.