Nefarian is located atop Blackwing Lair after

Chromaggus. He has two forms: his Human form, Lord Victor Nefarius, and his dragon form, Nefarian proper. Nefarian is an extremely difficult encounter as it requires a full 40-man raid to win along with strong coordination and leadership. On average, the full encounter consists of 3 stages and takes about 20–30 minutes to finish.

To activate the Encounter a person must walk up to Nefarian's throne and talk through what he says. Upon completion of this he says "Let the Games begin." From here, Nefarian is invulnerable, and walks amid the raid randomly shadow bolting, mind controlling people and casting fear on random targets. The room begins to flood with Drakonids at the same time.

Phase 1 of the fight consists of defeating the drakonids.

There are 6 types of drakonids that spawn. In every Nefarian encounter you will fight Chromatic Drakonids; the largest and toughest drakonids. Fortunately they spawn in far fewer number than the other colors. In addition to the Chromatic Drakonid, 2 other random colors of Drakonids will spawn as well. One color will spawn from the southern door, and one color will spawn from the northern door. Colors are fixed for each instance: if Nefarian is attempted multiple times before the instance resets, the same color combinations will appear.

Different colors of Drakonids have different special abilities and are resistant to different schools of magic. Note that, unlike some other Blackwing Lair mobs, these Drakonids are not particularly vulnerable to any magic. Below is a list of their colors and associated abilities / resistances:

The Drakonids can be killed by either AoE attacks or direct damage and aside from Chromatics, they do not hit very hard and do not have a lot of health.

Raid is split up into groups so that DPS is split up as evenly as possible. The easiest way to do this is start with a Physical assist train on one side (Hunter, Rogue, Warrior) with nuker/AoE classes (Mage, Warlock, Paladin, Shaman) on the other, with healers and tanks being split evenly. At least 2 to 3 tanks need to be designated per side to be able handle Chromatic Drakonids. Taunt moves should be enough to hold mobs, but any that leak should be the primary target, followed by a designated assist target.

Ranged DPS classes (Mage, Warlock, Hunter) and healers should be positioned max range from either door so that they can switch sides quickly. Hunters can be moved between sides to tweak the DPS balance. Hard, steady DPS is crucial so if one side is waiting for spawns, people need to switch over; the non-chromatic drakonids shouldn't live past taunt duration while chromatics have significantly more health and need to be "sunder" tanked.

For Black combos, Warlocks should be switched off with Hunters so that they can make full use of their moves. Blue doesn't impact +hit/-resistance Mages too badly but it might help to add Hunters to assist train mobs.

Red and Bronze drakonids should be handled primarily by casters and only melee with called out healers.

Green drakonids are the least harmful so this side should be composed mainly of dispellers and classes that wouldn't do versus the other color.

After killing 42 Drakonids, no more will spawn (you still have to kill all the others that are up), and Nefarian lands on the balcony in Dragon Form. This is the beginning of Phase 2 of the encounter. Before landing he will cast an AoE (ignores LoS) Shadow Flame on the entire raid. This version of the spell does about 1000 shadow damage and is completely resistible. Previously, every member of the raid must have been wearing an Onyxia Scale Cloak to avoid the fatal DoT from the Shadow Flame (frost mages could use their Ice Block ability and paladins could use their Divine Shield ability to avoid the Flame without the cloak.). By now most of the drakonids should be dead. Move your raid to this area and start DPSing him down, from here on out its simple damage dealing with a few twists. It should be noted that, if your raid attempts the aoe version of phase one and stays near the throne, you can stand BEHIND the throne and NOT be hit by Shadow Flame. It is the only place in the room that has this property (and is therefore was the only way for someone without a Cloak or immunity shield to live).

He has all the abilities of normal dragons: Conical breath attack (shadow based), cleave, and bellowing roar. He also does Veil of Shadow on the target nearest to the center of his hitbox. Nefarian casts an AOE fear roughly every 30 seconds. The ground shakes immediately before this occurs, giving the MT time to stance dance and use berserker rage. Alternatively, have any priests cast fear ward on the MT. It's worthy to note that his fear has limited range of about 35 yards, so ranged DPS and healers can completely avoid it by proper positioning. Approximately every 25–35 seconds he will "call out" a specific class. During class-call outs, that class will have some negative effect on them. Below is a list of each class and the effect their call-out has on them:

When his health reaches 20% he will resurrect all the Drakonids killed in Phase 1 as "Bone Constructs". They hit fairly hard but do not have a lot of health, so they are relatively easily AoE'd to death. It is advisable to move AoE groups into position where the Drakonids were originally killed prior to reaching 20% HP to ensure their swift elimination, and to avoid healers getting swarmed. It is also advisable to wait for an appropriate call, where you don't lose any healing. Since the Bone Constructs are classified as Undead they are vulnerable to Paladins' Holy Wrath, which should be used in conjunction with other AoE sources. An effective technique for Paladins is: 1.) BoP a Mage 2.) Divine Shield 3.) Holy Wrath 4.) Use Stratholme water (if you brought some along). This would be an ideal time for the non-MT Warriors to pop Shield Wall and Challenging Shout in a staggered order to ensure adds do not attack healers (assuming these abilities are not on cooldown from Phase 1). Corrupted Shaman Totems from the Shaman class call will affect the adds; it is advisable to have those totems killed before the adds spawn. Note that if your computer isn't top of the line you will have extremely low FPS when the drakonids are resurrected, so make sure you turn your graphics down and do anything else you can to increase performance before the fight.

After this he continues to cast his class debuffs up till he dies.

Nefarian encounter can be reattempted any number of times, however, it takes 15 minutes for him to reset after a wipe (as of patch 1.9.3). Prior to this patch, once the battle had progressed to Phase 2, and the remaining Drakonids had all been killed, the gates would never re-open. Therefore, a Soulstone or other wipe prevention must have been in place, or the battle could not be re-attempted until the instance had reset completely. Nefarian would still respawn after 15 minutes.

An alternate strategy for Phase 3 is to have all the AoE move towards the Drakonids have the entire raid (with the exception of the MT) move to one spot, the Heal Aggro alone will draw the Drakonids where Mage AoE becomes much easier and much more effective.

Downing Nefarian is no longer about tactics. As long as people round up and just aoe down the drakonids, there should be absolutely no problem at all to get him down on the first try. Without the adds, Nefarian has become a tank and spank fight and all the communication needed to down him prior to The Burning Crusade is no more even a bonus.

This macro was updated patch 3.2, you may use this to unequip then equip your weapon. When you see his call simply use it to remove the weapon and after the call comes then use it again to equip the weapon once again and continue to attack. Note: you need the first backpack (the original bag) slot empty for this to work!

Onyxia have been moved to Nefarians loot table.[1]

Gossip text and aggro
Do you expect me to cower before the mighty legion of <name>? You are nothing to me. Less than nothing. Had I desired your head, it would have been: presented to me on a pike.
You have made the mistake that all mortals make.
*Victor Nefarius sighs.*
Time does strange things to those that use it as a form of currency.

I've made no mistakes.
In your rush to glory, you assumed that the pace of this game revolved around your actions. Can you even fathom how preposterous that sounds to a being like me? A being that if so inclined could cause your own insignificant thoughts to crush the peanut sized mass of grey matter floating within your skull?

You have lost your mind. You speak in riddles.
It's simple really! Allow me to summarize...

Please do.
In this world where time is your enemy, it is my greatest ally.
This grand game of life that you think you play in fact plays you. To that I say...
Let the games begin! 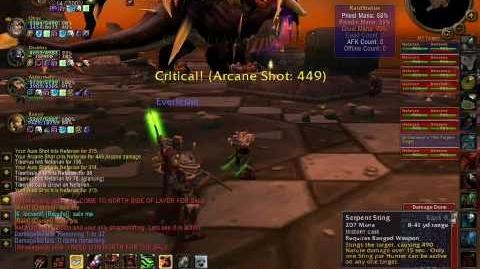 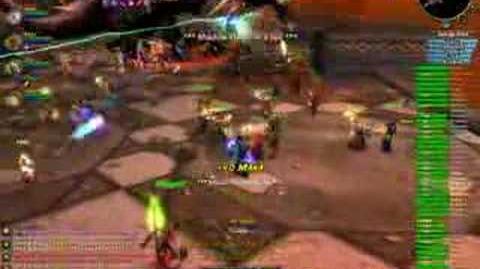 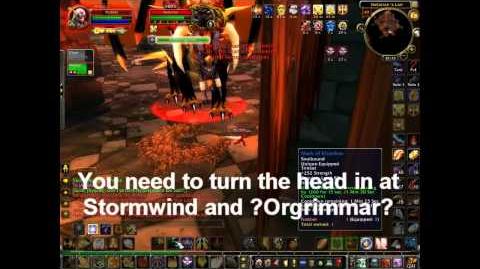 Retrieved from "https://wowwiki.fandom.com/wiki/Nefarian_(tactics)?oldid=2816843"
Community content is available under CC-BY-SA unless otherwise noted.