Note that "Necropolis" refers both to the weakest of the three types of undead "town halls" in Warcraft III and the name for the general concept.

The necropolis serves as the central command structure of the undead army. Lumber harvested by ghouls is processed, and loyal acolytes train for tasks from their undead masters. Even when unattended, the vengeful spirits of the dead protect the necropolis from enemy attackers. In time, this structure can be further modified to become the Halls of the Dead.[1] (W3Man 43) After that, it also may turn into a black citadel.

Naxxramas is the most famous but Malykriss: The Vile Hold is said to be the mightiest necroplis ever constructed.

The Lich King adopted the nerubians' distinctive architectural style after the War of the Spider,[2] and Naxxramas was literally torn free from the ground by agents of the Lich King.[3] (RtD 3) It is also said that Obrahiim, the Traveler conceived both Naxxramas and Acherus: The Ebon Hold.[4] They are then summoned by acolytes.[1] (W3Man 39)

In World of Warcraft, generic types could be seen during the Scourge Invasion, and the mighty Naxxramas could be found in the Eastern Plaguelands. In Wrath of the Lich King, many more can be seen. Naxxramas has moved to the Dragonblight, and there are seven new necropolies — one to replace Naxxramas in the Eastern Plaguelands, two in Borean Tundra, three in Zul'Drak, and one under construction in Icecrown.

A necropolis is weaker than a Halls of the Dead, which in turn is weaker than a Black Citadel, but in World of Warcraft there does not seem to be a strong or definitive ranking between different types. There are two unnamed generic types, one seen during the Scourge Invasion based on Naxxramas, and a rounder type with an interior seen throughout Northrend, but no power scale has been given. However, Naxxramas, which is seemingly the largest and most important Necropolis, is said to not be able to withstand a direct assault from Acherus: The Ebon Hold.[5] Also, Malykriss: The Vile Hold, Acherus' replacement, is made of Saronite and implied to be even more powerful.[6]

While the plural form of the Greek word "necropolis" is "necropoleis", and not "necropoli" as commonly thought[7], Blizzard uses both "necropolises"[8][9] and "necropoli"[9] in game.

In real life, a Necropolis is a large graveyard usually located outside urban areas. It is a combination of two Greek words, nekro and polis, which translates to "City of the Dead".

Necropolis near Ironforge during the Scourge Invasion. 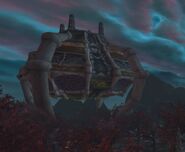 Retrieved from "https://wowwiki.fandom.com/wiki/Necropolis?oldid=2838320"
Community content is available under CC-BY-SA unless otherwise noted.