Were you looking for the Siege of Orgrimmar boss,

Nazgrim is an orc warrior he was introduced in World of Warcraft: Wrath of the Lich King. Nazgrim remained loyal to his Warchief during the Darkspear Rebellion and was killed in Orgrimmar by the adventurers.

This section concerns content exclusive to Wrath of the Lich King.Nazgrim firstly appears in Conquest Hold and bears the title "Sergeant". He is aware of Conqueror Krenna's temper and attitude. Krenna focused more on attacking the Alliance while Nazgrim thinks that they should pay more attention vrykul who are a bigger threat than the Alliance.

This section concerns content exclusive to Cataclysm.Nazgrim, now bearing the title "Legionnaire" can be found throughout Vashj'ir. He spawns after completing the quest Pay It Forward and is first encountered upon The Immortal Coil when it sets sail from Orgrimmar to Vashj'ir and later gives quests to Horde players upon the sunken boat. He can also be found within the Throne of the Tides instance.

Nazgrim leads the expedition with the Horde heroes as they enter Pandaria. Nazgrim and the Horde come into contact with the Pandaren, who are initially cautious as the Horde and the Alliance are bringing a war to Pandaria.

Nazgrim and his vanguard joined the rest of Horde forces, he was stationed to the newly-constructed Domination Point during the Domination Point (scenario). When the SI:7 attacked their base, Nazgrim, Warlord Bloodhilt and adventurers successfully stopped the invasion. During the Dominance Offensive, Nazgrim sends a player to Darnassus, to help the Sunreavers in stealing the Divine Bell, Jaina quickly found out that the Sunreavers played a huge part in the theft in Darnassus.

Nazgrim was summoned by Garrosh to stop the Darkspear Rebellion. He can be found at Dranosh'ar Blockade, instructing some Kor'kron to defend the Bladefist Bay against a possible Alliance attack.

The Siege of Orgrimmar Edit

Nazgrim is approached by Thrall and Varok Saurfang on the outskirts of Orgrimmar, they requested an audience with Garrosh in hope to end the war. Nazgrim allows them to enter Orgrimmar, but he also warns them that Garrosh may not heed their words. At the beginning of the siege, Nazgrim was tasked to defend Valley of Strength, he faced Vol'jin and Baine Bloodhoof, he left his Iron Juggernaut to deal with the rebels. When Tyrande Whisperwind and her sentinels breached the city's gate, Nazgrim and his forces fled to defend the entrance to The Underhold.

A quest involving Death Knights going to Durotar and talking to Thassarian about resurrecting Nazgrim since he is waiting to be resurrected even though he died a warrior's death. From the quest text, it is said that he became one of the Four Horsemen. [1]

Quests in Wrath of the Lich King Edit

Throne of the Tides

Quests in Mists of Pandaria Edit 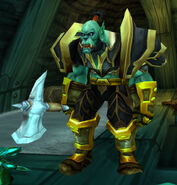 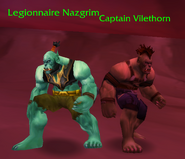 Legionnaire Nazgrim aboard the Stygian Bounty 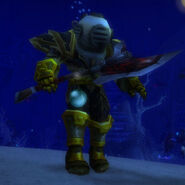 Nazgrim during Defending the Rift 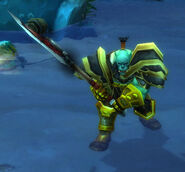 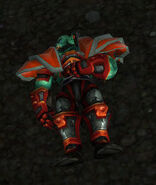 Nazgrim unconscious after the zeppelin wreck.

Nazgrim at Hellscream's Fist, when it was a subzone rather than a ship.
Add a image to this gallery

Retrieved from "https://wowwiki.fandom.com/wiki/Nazgrim?oldid=2853132"
Community content is available under CC-BY-SA unless otherwise noted.