Advisor to Thrall, Overseer of Thrallmar

"The struggle to free the orcish people from our tainted blood has not been easy." [1] (TCGMoL 196)

Nazgrel is a level 62 elite quest giver located in the barracks of Thrallmar in Outland's Hellfire Peninsula.

Warcraft Adventures: Lord of the Clans

Nazgrel, the last living relative of Kash'drakor,[2] was an orc who apparently helped Thrall to liberate the orcish clans from the internment camps in the cancelled game Warcraft Adventures: Lord of the Clans.[3]

The Founding of Durotar

After the Battle of Mount Hyjal, Thrall took the Horde to an area of The Barrens, which he claimed as his own, and named it Durotar after his father. The capital city was Orgrimmar, and Nazgrel was placed in charge of its security.[4]

Nazgrel despises the Alliance, and humans in particular. He views Thrall's continued insistence that the humans can be reasoned with to be a weakness, and feels that victory through war is the only way that the Alliance will end their persecution of the Horde. However, Nazgrel is completely loyal to his Warchief, and thus does not act on his opinions.

During the construction of Orgrimmar, Bloodfeather, a harpy queen, assaulted the caravans of supplies coming to Orgrimmar, but Nazgrel was unable to leave the fledgling city to deal with her. Fortunately, Rexxar, a recent arrival to Orgrimmar, offered to assist Nazgrel, and was sent to dispose of her. Nazgrel was pleased when he returned with the harpy's heart, and rewarded him with items from the armory.[4]

Nazgrel was uneasy as news of the humans' actions at the coast reached Thrall, but obeyed Thrall's command for peace, letting Rexxar handle them. But when they lost contact with Gar'thok's outpost, Nazgrel accompanied Rexxar to investigate, and they found the outpost destroyed and human camps along the coast. Nazgrel, Rexxar and Rokhan proceeded to kill the humans to take revenge for their actions. Later, Nazgrel perceived that perhaps an attack was imminent, and so sent Rexxar and his allies to the Echo Islands to warn the trolls.[4]

Since that time, Nazgrel has continued to serve unquestioningly at Thrall's side. Before patch 2.01, he could be found inside Grommash Hold in the Valley of Wisdom, in the orcish capital of Orgrimmar.

In the Burning Crusade, Nazgrel has relocated from Orgrimmar to Outland, where he commands the outpost of Thrallmar in Hellfire Peninsula. This move is most likely to give him a more active part in World of Warcraft, as he works as the major figurehead in the frontier town, similar to Danath Trollbane for the Alliance. 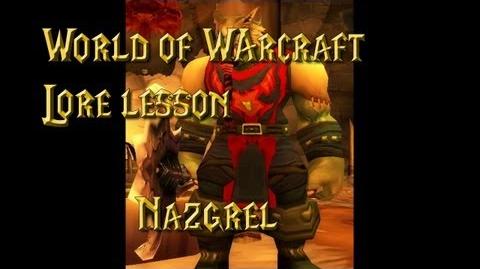 
Retrieved from "https://wowwiki.fandom.com/wiki/Nazgrel?oldid=2802523"
Community content is available under CC-BY-SA unless otherwise noted.