Naisha or statistics in

Huntress, Lieutenant of the Watchers

Naisha and Maiev followed Illidan to the port of Nendis, where they encountered fishing villages pillaged and ruined, and mutilated bodies strewn about the debris. Some thought that perhaps demons did it, and Maiev responded that they couldn't imagine what horrors Illidan had called to his side. Naisha fought through Illidan's amassed forces of satyrs, and even their newest enemy, the naga. And to her horror, Illidan climbed aboard a ship at Nendis and fled across the sea, leaving his naga to destroy what ships remained. But Naisha and the Watchers killed the naga before they could scuttle all the transports.

Naisha travelled with Maiev into the sea, and landed upon the Broken Isles. Naisha was confused, for though they had headed due east as Maiev had stipulated, these islands had not been on the map, but Maiev recognized the strange ruins - it was Suramar, the ancient homeland of her mistress Maiev before the Great Sundering. Naisha was in awe, for what sort of power could raise islands from the sea floor?

Naisha and Maiev battled through Illidan's guards and found him rushing into the Tomb of Sargeras. Maiev was quick to follow him, and Naisha was quick on her heels, but within the tomb, they found strange runes scrawled in blood upon the walls. Maiev understood them, for they were orcish, and related the tale of Gul'dan. Naisha noticed that he continually referenced an "eye," and Maiev guessed that it was a demonic artifact, and that perhaps Illidan sought it now.

Naisha and Maiev tracked Illidan to the inner core of the Tomb, where he had found the Eye of Sargeras and promised to make Maiev his first victim, by using the Eye to bring the Tomb down around them. After a cave in, they were immediately cut off from the rest of the Tomb, which was already sinking and collapsing. Maiev's powers would spare her, but the Watchers would be left behind.

Naisha, however, told Maiev to forget about them, and flee to warn Malfurion of his brother's insidious intentions. Maiev reluctantly left her followers behind, and Naisha was killed in the cave-in.

Maiev remained bitter about Naisha's death, and when fighting Illidan in the Black Temple one of her war cries has mention of her fallen friend and lieutenant.

This section concerns content exclusive to Legion.At some point, it appears Huntress Naisha was raised as undead 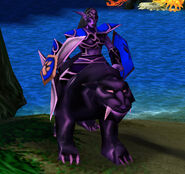 Naisha fan art
Add a image to this gallery

Edit to the right of the section title.
Retrieved from "https://wowwiki.fandom.com/wiki/Naisha?oldid=2862807"
Community content is available under CC-BY-SA unless otherwise noted.