The naga are former Highborne night elves who became mutated into vengeful humanoid sea serpents. While many remain on Azeroth to attempt to reclaim the surface world, a large group followed the power-mad Betrayer, Illidan Stormrage, into Outland and proceeded to claim the watery areas of the shattered land.

Ten thousand years ago, during the reign of Queen Azshara, there was an elite magic-using sect known as the Highborne, who dabbled in magics that many other elves considered heretical by drawing upon the power of the Well of Eternity. When the Well of Eternity imploded at the conclusion of the War of the Ancients, sundering the world, the Highborne inhabitants of Zin-Azshari were trapped in the blast. At the last second, Azshara struck a deal with the Old Gods for her survival. Azshara and her followers were dragged down beneath the raging sea... but they did not die. Twisted by the Old Gods, invigorated by the Well's energies, they took on new shapes, new powers and became the hateful, serpentine naga.

When the naga awakened, they set about building a new life for themselves on the ocean depths, within the abyssal sea trench beneath the swirling waters of the Maelstrom they built their new city, Nazjatar. Azshara herself expanded with hate and rage, becoming a massive monstrosity, reflecting the wickedness and malice that had always hidden within her core.

There in the depths of the ocean for ten thousand years the Naga plotted their revenge against the night elves. Most naga are still content to wait. However, a small group led by the naga Sea Witch, Lady Vashj, answered a summons from Illidan Stormrage to aid him in his quest to destroy the Frozen Throne. They made new allies in the form of their Highborne kin the blood elves as well as enemies of the night elves and the Alliance. They aided Illidan in the recovery of the Eye of Sargeras, and fought alongside the blood elves to take Outland as well as at the Icecrown Glacier against the Scourge. After suffering defeat at the hands of Arthas this group retreated back to Outland with Illidan.

The exact reasons for Vashj's alliance with Illidan remain a mystery, though general speculation points to a scheme of the naga's presumed masters.

More recently naga have begun to reappear around the coasts of the world, creating settlements on land, most noticeably in the ruins of their old cities in Azshara. It also seems that some have made a fort in Northrend, in the Riplash Ruins. Whether these forces have emerged on Azshara's orders or are another sect entirely is unknown. 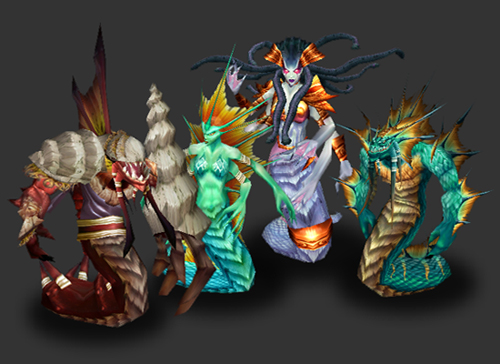 Naga only marginally resemble the noble race they once were. Their proud Kaldorei visages are warped and twisted. The naga are part night elf, part serpent, and some have evolved bizarre oceanic mutations. In this way, the race has developed an array of genetic variations and defenses, such as ink jets, tentacles, razor fins, venomous fangs, hardened barnacle carapaces and spined fists. The Sea Witches even sport venomous serpents instead of hair.

Naga serve their dark empress Azshara without question. Naga society is matriarchal, and the sexes have diverged radically, both mentally and physically, in the millennia of their estrangement. Women are dominant and often train as spellcasters, while men form the brute labor force and serve their women as physical warriors.

Naga are avaricious and sadistic, and their millenia of aquatic banishment has only intensified their evil, power-hungry nature.

Naga typically speak their own language, Nazja, and most know Common. For various reasons, individual Naga learn to speak with the creatures with which they interact. Some also learn the language of their heritage, Darnassian[1] (MG 106)[2] (A&HC #?) (or may even remember it).

Naga males and females have different features; in their transformation, males lost some of their intelligence[citation needed] but increased in size and strength. Their faces now appear almost draconic with little resemblance to their Elven heritage. Females kept more of their Elven features and their intelligence. Naga female faces are fair, even beautiful. Most females have four arms, and the Sea Witches sprout black serpents from their heads.

Naga society is female dominated; they are considered the intellectual superiors and possess the greater magical power[1] (MG 105). Males can rise to prominence and even lead communities, but there is a limit to what they can achieve. In terms of class, this makes them the opposite of the night elves they evolved from, where males typically work magic and females fight (though the kaldorei lack intellect-based prejudice).

The naga have very few allies on the land. The ones who left with Illidan consider the blood elves their allies and kin, but most Alliance races have formed their opinions of the naga based on night elf views and therefore will find few friends there. The Horde are dismissed by the naga as weakling savages, practitioners of Divine Magic, and the naga will have no part with them. Even though the blood elves of Quel'Thalas are members of the Horde, there is no sign of diplomacy between the two powers; in addition to naga opinions, the Azerothian blood elves do not unilaterally accept the philosophy that Kael has adopted, and likely wish to avoid association with the naga.

The naga have managed to enslave large numbers of Mur'guls, a mutated strain of murloc. This aquatic race fears the Naga's magical abilities. The naga's main rival for dominance of the ocean are Sea Giants; these creatures hate naga and slay them whenever the giants encounter them. The naga's only allies on land are the Satyr.

The Naga have an army composed of various races. Mur'gul slaves are used as staging troops and cannon fodder, with artillery support from mighty Dragon Turtles.

Naga males serve as shock troops; they deploy as infantry in close formations wielding scimitars, tridents and nets while females stand back hurling spells at the enemy. Males may have command over small numbers of troops but females will always be in overall command of any Naga force.

No information is available on the internal division of naga. However, the game has provided us with a list of names that are associated with naga NPCs.

The twin massive skeletons of ancient combatants in Valley of Bones in Desolace bear striking resemblance to those of naga, along with tridents as their weapons. It is believed that these are the bones of Old Gods.

Retrieved from "https://wowwiki.fandom.com/wiki/Naga?oldid=843379"
Community content is available under CC-BY-SA unless otherwise noted.