Chieftain of the Laughing Skull clan, Hero of the Warmaul

Mogor the Ogre, the treacherous ogre mage lord of the Laughing Skull clan, remained in Draenor during both of the crossings.

Before the opening of the Dark Portal

Before Ner'zhul rebuilt the Dark Portal to Azeroth and sent his Horde through to gather the artifacts required for his grand scheme, he required the knowledge held by an order of Death Knights to complete his preparations. This group of Death Knights, though bearing the colors of the Shattered Hand Clan, was currently under the control of Mogor, the renegade ogre-mage of the Laughing Skull clan, who was using them for some dark purpose of his own.

After the opening of the Dark Portal

Though he was defeated he survived, when the Alliance Expedition invaded Draenor, Mogor sided with them in exchange for the dominance of his clan in the Blade's Edge Mountains. He promised to deliver to them the Book of Medivh.

Mogor was uncharacteristically true to his word, and even managed to escape the wrath of the shaman Ner’zhul.

Mogor in World of Warcraft

In the Burning Crusade expansion, Mogor leads the Warmaul Ogres in the Laughing Skull Ruins in northern Nagrand in Outland. He watches, while shouting insults at you, during the series of battles in the Ring of Blood. After you finish pummeling (or getting pummeled by) the 5 elites, Mogor himself comes down to fight you personally. He has a slight heal, (but has a ton of health, making it a very annoying ability) When he is first killed he will resurrect himself (He will have less health this time around) and will enrage, hitting for over 1000 damage on plate armor.

In World of Warcraft: Warlords of Draenor, Mogor oversees combat at the Ring of Blood in Nagrand, Draenor and holds the title of "Lord of the Ring". Unlike his Outland counterpart, this version of Mogor has only one head. Following a chain of pre-requisite combat arena quests at the ring of blood, players get the chance to face Mogor in combat once again, as they did in Outland.

Chain Lightning (Will hit everyone in front of him)

Healing Wave (Uses throughout the fight, cannot be interrupted)

Reincarnation (Can resurrect himself) 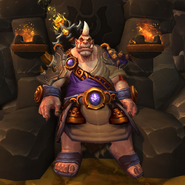 Mogor in Warlords of Draenor.
Add a image to this gallery

BlizzPlanet Warcraft II: Beyond the Dark Portal - Orc Campaign - Slayer of the Shadowmoon


Retrieved from "https://wowwiki.fandom.com/wiki/Mogor_the_Ogre?oldid=2782310"
Community content is available under CC-BY-SA unless otherwise noted.