Misha is a level 72 elite named bear that accompanied Rexxar through the Stonetalon Mountains, Desolace, and Feralas. In The Burning Crusade, Rexxar and Misha can be found in the Thunderlord Stronghold in the Blade's Edge Mountains, an area in Outland.

Rexxar's trusted companion, Misha, is a magical bear who will fight at Rexxar's side whenever she is called upon. Misha battles ferociously, and loyally follows Rexxar to every location he travels to. Rexxar is very protective of Misha when they enter civilized areas, and ensures that the bear stays close to him.

Misha, as seen in Warcraft III.

Rexxar and Misha in Desolace.

Rexxar and Misha in Thunderlord Stronghold.

Early artwork of Rexxar and Misha 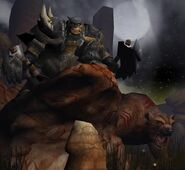 Rexxar and Misha on the menu of the bonus campaign, The Founding of Durotar
Add a image to this gallery

Retrieved from "https://wowwiki.fandom.com/wiki/Misha?oldid=2815133"
Community content is available under CC-BY-SA unless otherwise noted.