Metzen the Reindeer[44.2, 38.4] is a friendly reindeer who was kidnapped by The Abominable Greench and his rotten little helpers. He is being held captive in a corral just outside Growless Cave in the Hillsbrad Foothills.

Metzen the Reindeer was kidnapped during the Feast of Winter Veil by both the Dark Irons of Searing Gorge and Southsea Freebooters of Tanaris, somehow at the same time.

He could be freed using a [Pouch of Reindeer Dust].

Metzen the Reindeer was named after Blizzard's Chris Metzen. 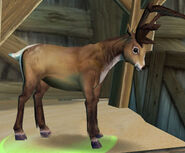 Metzen at his old location in Tanaris.
Add a image to this gallery

Retrieved from "https://wowwiki.fandom.com/wiki/Metzen_the_Reindeer?oldid=2591525"
Community content is available under CC-BY-SA unless otherwise noted.