Meryl Felstorm[1] (previously known as Meryl Winterstorm) is an undead human sorcerer who appears in World of Warcraft: The Comic. He is an incredibly powerful human magic user, with nearly three thousand years of experience, and the foster father and mentor of Med'an, Garona Halforcen's son.

Meryl fought in the Troll Wars, and later became one of the founding members of the now defunct Council of Tirisfal. There is little record of his exploits with the Council, but at some point he aided them in banishing the dreadlord Kathra'Natir.

Though Meryl is undead, he is neither one of the Forsaken nor Scourge. He was mortally wounded during the Troll Wars, but was forced by circumstance to survive as one of the undead. During all this time, he has kept himself "alive" by the strength of his own magic.

Garona asked him to take care of her son, Med'an. But when Med'an witnessed his mother being kidnapped by the Twilight's Hammer, he chased after her. When Meryl discovered it, he quickly flew after him, arriving in Theramore just in time to warn the island of an approaching Scourge Necropolis. After fighting off the Scourge, he discovered that Med'an's father was Medivh, and along with Valeera Sanguinar he traveled to Ahn'Qiraj, where Med'an was held as a prisoner. They managed to save Med'an but before they were able to leave, they were intercepted by Cho'gall who had knocked Meryl out with his incredible power. Valeera tried to fend off Cho'gall while Med'an tried to revive Meryl but Cho'gall was too strong and growing more desperate, Valeera offered herself willingly to the demon within her body in order to obtain the power to fend off Chog'all. This allowed Meryl enough time to recover and teleport them to safety. When they reached a secure location, Meryl discovered that the demon that had possessed Valeera was non other than Kathra'Natir, a demon whom he and the original Council of Tirisfal banished centuries ago. In order to lure the demon away from Valeera's body, he challenged the demon to possess his body instead and being the stronger of the two wills managed to repress the demon in his body.

Though he tried to contain Kathra'Natir, his will eventually faltered during the New Council of Tirisfal's offensive on Cho'gall and his Twilight's Hammer Cult. Having lost control, the demon was able to slay the blood elf Dalynnia Wrathscar and drain all of her power before Meryl got him back under control. Recognizing that his demonic possession was a liability to those around him, he declined membership in the New Council of Tirisfal and left in self-imposed exile, renaming himself Meryl Felstorm as a sign of his corruption.[1]

Meryl Felstorm is an undead mage featured in DC Unlimited's World of Warcraft: Series 1 action figure set. He appears to be wearing the Corruptor Raiment set. 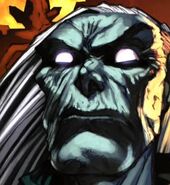 Meryl in Beginnings and Ends

meryl felstorm
Add a image to this gallery