Deceased, killed at the battle for Theramore

Marcus Jonathan was the general of Stormwind and high commander of Stormwind Defense. He was a level 72 and then level 87 elite quest giver located in the Valley of Heroes in the human capital city of Stormwind City.

The knight was tall, with wide shoulders and a sweeping mustache, proudly wearing a suit of heavy plate mail. The Stormwind insignia was emblazoned across both the breastplate of his armor and the crest of his helm, and a series of smaller engravings indicates that he was a high-ranking officer in the human army. His stance was that of a battle-hardened veteran, wary but still at ease, as if he was absolutely confident in his ability to deal with any danger that comes his way. General Marcus Jonathan was absolutely fearless in battle, completely willing to lay down his life in the defense of his country. He always strode boldly into combat, attempting to identify and then work his way toward the leader of the enemy forces. He preferred to move steadily into the middle of the enemy force, surrounding himself with enemies in order to maximize the benefit of his cleaving attack and to gain a moderate amount of cover from enemy archers.[1]

Marcus and Reginald Windsor served together under Turalyon.[2]

Marcus visited Dalaran at least once while still a private, as evidenced by [a coin] from the Dalaran fountain. He seems to have more than gotten his wish "to grow a glorious, bushy mustache someday."

In Cataclysm, General Marcus Jonathan aids in the arrest of Hogger in Elwynn Forest, and transports him to the Stormwind Stockades with the help of High Sorcerer Andromath.

In Mists of Pandaria, General Marcus Jonathan was killed at the Battle for Theramore, he was replaced by

He started the quest

After a player attempts to slay Hogger, General Marcus Jonathan appears, along with High Sorcerer Andromath 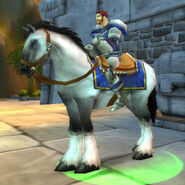 At the gates of Stormwind
Add a image to this gallery