Maraudon (pronounced Maraw-dun) is a 5-player dungeon, consisting of 3 wings (The Wicked Grotto, Foulspore Cavern, and Earth Song Falls), located in the Valley of Spears in Desolace. It is a combination of ancient centaur burial grounds, as well as a primal temple dedicated to the elemental earth.

Added in patch 1.2, Maraudon was the first dungeon to be added after the release of World of Warcraft. Enemy levels range from 30-44 and the instance portal will block out all adventurers under 25.

Maraudon is a holy place to the centaur — it is the tomb of Zaetar, keeper of the grove and son of Cenarius, and the house of Princess Theradras, an earth elemental.[1] Zaetar rejected his keeper heritage when he joined with the princess of the chaotic earth elementals, Theradras. Their unholy union gave birth to the misshapen and cursed centaur who promptly slew their father for his part in their misbegotten creation. Fearful of Cenarius' wrath, the grief-stricken Theradras sequestered her dead lover's body in her secret sanctuary, the Crystal Caverns of Terramok, where she watches over him to this day. Travelers who come to Desolace have little trouble spotting Zaetar's tomb, for the blessing of nature that permeates his being transformed his resting place into a verdant paradise of flora and tranquil pools. Today, this tomb is now trodden by the hooves of Zaetar's children who have claimed this great cavern as their sacred stronghold Maraudon.

Within the tomb is a maze of underground caves and tunnels, populated by the spirits of the long-dead centaur khans. Earth elementals, basilisks, and rock borers also inhabit the site. It is rumored that satyrs and other emissaries of the Burning Legion have moved into these caverns as well.[1]

Although each of the five centaur tribes (known as Black tribe, Brown tribe, Green tribe, Red tribe, and Yellow tribe) maintained its own stronghold elsewhere in Desolace, this was once the region's capital (shortly after the Battle of Mount Hyjal,[2]) when there were no other cultures of any note in all of Desolace.[3] At that time, the centaur had run all others down in their unceasing lust for conquest. However, now that Desolace has no affiliation, and members of other civilizations have moved back in, it is only one of several major settlements.[4] Desolace no longer has a capital.[4]

Maraudon has a vast gathering of palatial tents surrounded by a palisade, the Valley of Spears, it once served as a cultural center and meeting place for all centaur.[5] However, in recent times, many of the centaur tribes are at war and now it is inhabited only by the Maraudine clan. They are the protectors of Maraudon and only the bravest and mightiest of the tribe's warriors are chosen to guard the tomb of Zaetar.[6]

Behind a series of spiked barriers in the center of this mesa stands Terramok, an ancient titan vault rumored to hold Theredras, former princess of the vile earth elementals and legendary mother of the centaur race. Some even claim that Theradras guards the tomb of her husband, the keeper of the grove killed by the first khans. The only permanent centaur resident is Krullaran the Prophet. The centaur of Desolace turn to the khans for protection, but they look to Krullaran for guidance. Many believe he communes with the titans and possesses insight to the glorious return that the centaur will someday make to the northern lands.[7] The name Maraudon may come from Maraudos.

Protected by the fierce Maraudine centaur, Maraudon is one of the most sacred sites within Desolace. The great temple/cavern is the burial place of Zaetar, one of two immortal sons born to the demigod, Cenarius. Legend holds that Zaetar and the earth elemental princess, Theradras, sired the misbegotten centaur race. It is said that upon their emergence, the barbaric centaur turned on their father and killed him. Some believe that Theradras, in her grief, trapped Zaetar's spirit within the winding cavern - used its energies for some malign purpose. The subterranean tunnels are populated by the vicious, long-dead ghosts of the Centaur Khans, as well as Theradras' own raging, elemental minions.

Originally associated with the 'purple tunnels' or crystals, this is a smaller wing containing one boss, Vyletongue. Groups of non-elite imps patrol, so AOE capability can be handy. Some Satyrs use gouge, incapacitating the tank and causing all the monsters to attack the next person on the threat list. Warriors can use Berserking Rage judiciously to mitigate this. Vyletongue himself comes with stealthed guards, and randomly teleports around when you start fighting him.

Originally associated with the 'orange tunnels' or crystals, this wing's denizens are composed of slimes, plants, and dryads (mostly). Things to watch out for are some of the plants knockback abilities, and the oozes, which must be kited and killed by ranged DPS. These oozes have an aura which does a large amount of damage every three seconds. Bosses consist of Razorlash and Noxxion.

The elemental shrine, consisting of many giants. 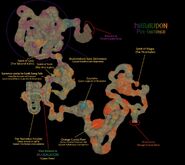 A pre-instance guide to Maraudon.

An atlas guide to Maraudon.
Add a image to this gallery

[49D] The Scepter of Celebras and

[51D] Seed of Life) are obtained after you enter the dungeon itself. Also,

[49D] Legends of Maraudon is found in the Maraudon area but before you go through the portal, in the pre-instance area.

You need to do the following:

The khans are found in these areas:

This is a quick guide to doing the Maraudon instance for Alliance characters. Horde information has been added where possible.

Maraudon can be split into several sections. At the start of the dungeon, you'll kill the mobs without blinking. You will eventually find an area with purple glowing rocks on the left, orange on the right. There is also a central entrance which takes you to the Princess, but for a full run-through, you won't do that at first. Following the rocks, you enter an orange area or purple area, which lead to orange and purple entrances to the instance.

You can do Orange or Purple Maraudon at level 45 or 46. On the other hand, the Princess requires at least a couple of level 48s. I can't emphasize this enough: bring ample AoE. There are a lot of points where you get attacked by a lot of non-elites, and AoE attacks are vital.

The big pools aren't lava, they're water. Jump into one and fill your vial for Vyletongue Corruption. Talk to Cavindra. Kill the Khan and go into the instance.

There are small plants dotted around. They're not selectable. Use the filled vial near them and you'll get attacked (quite viciously). Killing each assailant purifies one plant. If you systematically clear the place you'll get 8 plants on the way to Noxxion. Every group member will get credit for the plant purification, regardless of who used the vial on the plants.

A couple of notable things: the bright green Creeping Sludge move very slowly and hit very hard - usually for 200-300 damage per hit, so its best to stay out of melee range, with a tank kiting them, and have your ranged DPS take them out one at a time. These aren't very difficult to kite around since they do move very slowly. A few tips:

You've got to kill Noxxion for Legends of Maraudon. About halfway through he will split up and spawn some non-elite elementals and will re-form after you've killed them.

After Noxxion, you can leave or push forward. There's one more boss (Razorlash) with a couple of good drops, and then Celebras. There's no point in doing Celebras without both the rod and the diamond.

After patch 2.3, Shadowshard Fragments are now soloable and involves killing level 42-ish rock elementals outside of the instance. The good news is you only need to kill 10.

Inside is a very easy instance that drops a lot of green AH fodder. Vyletongue himself has four stealthed guards. Two of them can be pulled without aggroing him. He's easy, anyway. He drops the other piece of what you will need to create the Scepter of Celebras.

Do note, however, that the Satyrs can gouge your tank, which can be disastrous if you aren't prepared.

You get to him either by pushing on in the orange or purple sides. A bit of an insane battle because he keeps summoning non-elites. A lot of AoE is the only way to go here.

After that (assuming you have the rod and diamond from Noxxion and Vyletongue), talk to him repeatedly and complete the sceptre quest. No more monsters will appear, so this bit is completely safe.

Phew, now you're halfway through the instance. If you push on, you'll fall into a big lake.

Prior to Patch 3.0.8, you could access the final part of Maraudon directly using the [Scepter of Celebras] by bringing it to an alcove in the middle of the pre-instance area and using it. It would then open a portal to take you to the shallow part of Earth Song Falls. After the patch, the portal to Inner Maraudon is simply open to all without need for the staff.

The first part of this area is full of interesting bosses to kill, but they're all pretty easy apart from the Princess. The ordinary mobs present more of a challenge:

There are a lot of patrols. Always wait for them, because they'll wipe even a good group very fast. The worst is that you can get pincered at T junctions by patrols going different ways.

The princess herself is a level 48 elite, but has a kick like a mule. She has two main notable attacks. She fears melees quite a lot and has a large range AoE attack. Nature protection potions are extremely useful here. If your party is underlevelled, make sure you buy some before going after her. Although fast, she's very kitable. As long as you can stay away from her, a hunter or mage can pound away without difficulty. A good way of maximizing that is to actually have your ranged casters on opposite sides of her, although this can obviously cause problems for your healers. Important: Make sure you're not close to the edges, or else you can get knocked off and down into the river below.

Having killed her, you'll get a quest called the Seed of Life. You need to get to Moonglade to do that, which involves grinding reputation with the Timbermaw furbolgs, but that's another story...(An alternative quick way to get to Moonglade is to swim north of Darkshore until you get a notice that you are entering Moonglade waters. Then drown and you will be taken to the Moonglade graveyard. Rez at the spirit healer and you will be in Moonglade!) Of course, druids are exempt from doing any of these since they can simply teleport themselves to Moonglade.

For details of the items these mini-bosses drop, see Maraudon loot.

A few other bosses need a mention as they drop blue items. Some, of course, are more interesting than others:

Just about everything in Maraudon uses nature spells or poisons. Equipping gear with good nature resistance isn't necessary but will make your life easier. Hunters are very beneficial in this instance thanks to their Aspect of the Wild which gives all group members an extra 45 nature resistance.

Against the princess, shadow resistance is helpful for the tanks to prevent the Fear effect. Once again, this is handy but not necessary. If you have a priest in the party with Fear Ward, this may also be useful applied against all of the party or just the tanks.

Maraudon's wings were lowered in level.

Retrieved from "https://wowwiki.fandom.com/wiki/Maraudon?oldid=2744688"
Community content is available under CC-BY-SA unless otherwise noted.