Unknown, A variant of Qiraji (presumed)

The Mantid are a race of insect-like creatures native to Pandaria. They bear a strong resemblance to the praying mantis, but unlike some insect races in the world, such as the Silithid, they do not operate with a hive mind. They are sentient beings, capable of constructing tall crystalline buildings and mastering weapons. Hidden behind the Great Wall for millenia, they swarm into the continent periodically, prompting the Pandaren people to drive them back. This time, however, they have started their charge a century early, driven by some mysterious force and catching the pandaren off guard. They are first encountered by players within the Valley of the Four Winds.

It was unknown what dungeons or raids they will be found in at first, though it was mentioned they would play a major role in some of the upcoming raids. Due to their proximity to the Stormstout Brewery in the Valley, they may play a role in that dungeon.[1][2] However, they seem to have their strongest presence in the Townlong Steppes and especially the Dread Wastes with incursions all along the great Serpent's Spine wall.

The Mantid people were once deemed a threat so great that the ancient Mogu who ruled Pandaria dedicated several generations to the construction of a zone-spanning wall solely to keep them at bay. Yet, the insectoid Mantid are no hive mind. They are intelligent creatures who organize themselves by caste, and claim total obedience to an Empress of their race. They are the builders of elaborate cities that range across Pandaria’s steppes. It is the manner of these cities' construction that makes the Mantid so dangerous.

The cycle of Mantid birthing and building revolves around the Kunchong, a colossal insect large enough to threaten whole towns by itself. The Mantid revere this enormous creature, and when instinct compels it to stampede throughout the continent, eating earth, trees, and lakes, they follow behind, collecting the amber-colored resin it secretes, birthing their young and creating their homes in its wake. If other races' homes are trampled by the Kunchong, it is of little consequence to the Mantid. Where the Kunchong's shadow falls, they walk. Where they walk, the land is transformed. 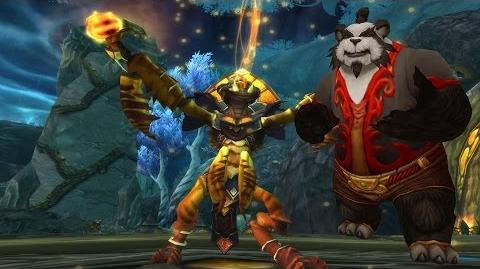 Retrieved from "https://wowwiki.fandom.com/wiki/Mantid?oldid=2838225"
Community content is available under CC-BY-SA unless otherwise noted.