The Mana-Tombs are a wing of the Auchindoun instance. It is accessed north from the Ring of Observance. Note that although the instance itself is called Mana-Tombs, the entrance area outside the portal is called Mana Tombs without the dash. The instance normally takes about 90-120 minutes.

Auchindoun is a former draenei holy site and Horde fortress in the middle of the Bone Wastes, in Outland's Terokkar Forest. It was a holy ground for draenei burial until the Shadow Council took over, summoned an extremely powerful demon as old as time itself, and destroyed half of Terokkar Forest in the process. Different factions now vie for power in this magical spot: Ethereals suck the arcane energy from the Mana-Tombs, the Burning Legion harvests souls inside the Auchenai Crypts, arakkoa zealots work dark magic in the Sethekk Halls, and the Shadow Council plots its domination of Outland from within the Shadow Labyrinth.

Its inhabitants are mostly ethereals opposing the Consortium. The Mana-Tombs provide reputation for the Consortium until Honored; afterwards, in order to gain rep with the Consortium in Mana-Tombs, it must be run on Heroic (which requires honored with Lower City). The ethereals of the Consortium cannot enter due to the anti-ethereal wards set by Nexus-Prince Shaffar; they have attempted to breach the gates with little success, but have still tested whether or not their efforts worked - often resulting in the spotaneous combustion (for lack of a better term) of the ethereal tester sent through the gate. According to the Consortium, the ethereals in the Mana-Tombs are robbing it blind and if you wish to do business with them, you'll have to aid in taking out the competition.

It is recommended that you take characters in the 64-66 level range. It is essential to have Crowd Control and/or Anti-caster abilities in group. One primary mage or warlock and a secondary can be helpful (Mage, Warlock, Second Priest, Hunter, Rogue). Tanking is not nearly as important in mana-tombs as it is in other instances so an off tank is not required. Having a back up healer is also helpful on boss fights, but they should be able to add to dps when demanded. A Priest or paladin is also needed for their shadow resistance buffs.

Preparation for the Instance Edit

In order to summon Yor, at least one player from your party must have the quest

This dungeon provides moderate to heavy difficulty for a party made entirely of rogues and druids. No mobs have stealth detection, but there are several 'pinch-points' where 2 saps may not be enough to sneak by.

A complete clear of Mana-Tombs will give about 1200 reputation with the Consortium until Honored, and 2400 each Heroic clear. 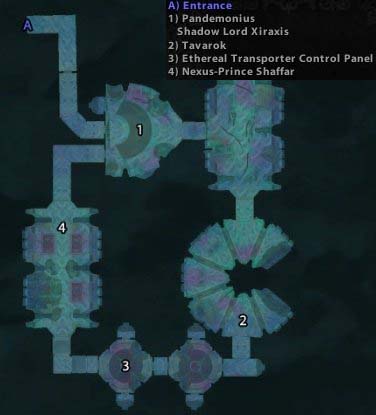 Two quests are available at the entrance to the instance:

The following are part of a quest chain that begins with

Image of Commander Ameer in Blade's Edge Mountains after completing

Retrieved from "https://wowwiki.fandom.com/wiki/Mana-Tombs?oldid=2838223"
Community content is available under CC-BY-SA unless otherwise noted.