The Magistrates Temple was a beacon of arcane power that many wizards traveled to to study magic. It is located in Dustwallow Marsh in the continent of Kalimdor. It is now overrun with plants and ruled by the Revenant of Burning Souls. Rexxar, Rokhan, Cairne Bloodhoof and Chen Stormstout defeated this ghost lord.

There are two secret areas within the Magistrates Temple. One contains some gold and a tome of each type (intelligence, strength and agility), this area is just to the south of the passage leading to the west part of the temple. In the other area there is a shop hidden (Black Market) selling among other things a Mask of Death. To access this area you need to smash some rock chunks just north of the passage leading to the east part of the temple.

The resident Revenants are not the only creatures to be present here. There are a variety of sea creatures, numerous Skeletal Orcs, a Doom Guard. Two unique, silver colored Siege Golems (level 12), and many Infernals. The Infernals too are unique in that there are three large ones with crimson colored flames instead of the bright green seen with the Undead faction. These may be the first Abyssals as they are more powerful than the standard infernal. Rokhan is very useful here, which means he has to be kept alive even if it means Rexxar and the others have been slain and that they've been resurrected at a nearby resurrection stone. 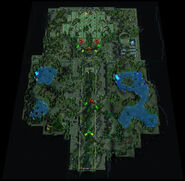 Overhead view
Add a image to this gallery
Retrieved from "https://wowwiki.fandom.com/wiki/Magistrates_Temple?oldid=2855056"
Community content is available under CC-BY-SA unless otherwise noted.