Magisters' Terrace is a 5-man instance located on the northeastern corner of the Isle of Quel'Danas, which was released in Patch 2.4.0. The instance includes outdoor walkways and courtyards, as well as indoor areas that use similar architecture as Silvermoon City. There is a scrying orb found on a balcony past the second boss that gives a sneak peak of the nearby Sunwell Plateau raid. Following this, players meet with Kalec, the half-elf avatar of the blue dragon Kalecgos.

The final boss is none other than Kael'thas Sunstrider, who has survived his ordeal in Tempest Keep. He appears in both normal and heroic modes, and drops epic level loot from both levels of difficulty.

Magisters' Terrace is only the third 5-man instance to be added via patch. The first was Maraudon in Patch 1.2 and the second was Dire Maul in Patch 1.3, which opened in December 2004 and March 2005, respectively.

The instance contains four bosses: Selin Fireheart, Vexallus, Priestess Delrissa and Kael'thas Sunstrider. On heroic mode, the instance will drop epics that are on par with Karazhan with Kael'thas dropping items on par with Prince Malchezaar.[1]

Groups should come prepared to this instance as the level of difficulty is greater than the hardest of the level 70 5-man instances like Shattered Halls and Shadow Labyrinth, and is on a similar level to that of beginning heroics such as Hellfire Ramparts and Underbog. On heroic mode Magisters' Terrace is one of the most difficult five man experiences at level 70.

Vexallus
71 Elite -- spawns small adds that must be killed.

Kael'thas Sunstrider
72 Elite -- Does a gravity-effect that causes the room to be like water. Make sure you 'swim' away from the floating spheres and other players. You can still cast spells (both offensive & defensive) while in this state. Heroic Mode has Shock Barrier/Pyroblast combo as well as one additional Phoenix.

The last trash pull in the instance, just before Kael'thas is by far the most difficult, being 6 mobs, and resets unless you kill ALL mobs in the group. The group can contain the following:

As of the patch a week after 2.4 went live, on heroic this is a 5 pull. I have seen any combination of these mobs, no more than 1 of each.

Strategy: CC is paramount here, and you'll need to use every trick your party has to keep these mobs occupied. Remember paladin's 'Turn Undead' is now 'Turn Evil' and will CC the Sister of Torment. Remember to use all your stun and interrupt abilities on the casters - the Ethereum Smuggler's Arcane Explosion volleys are particularly damaging to the group overall.

Positioning: One approach is to rush in and fight the mobs in the open of the Grand Magister's Asylum, obviously taking care not to pull Kael'thas - unlikely as there is plenty of space by the opening. This is a better option for less organized groups, as if disoriented players start running in and out of the corridor, many LoS issues arise. Second approach is to take on the group inside the corridor as this reduces the chance to interrupt CCs and a well positioned healer on the corner of the corridor exit can pull in all unaccounted for mobs (as they will try to get in LoS of the healer) where they can be collected by a war stomp or consecration on the tank and dragged further into the corridor. If all the group members are aware that they are not supposed to enter the room and hide behind the corners when they get aggro from the casters, this seems to work much better.

Blood Knight or Sunblade Physician are the only healers and should be nuked first. If mage is available you should consider keeping the Knight sheeped as he is probably hardest to take down out of all trash mobs.

If shadow priest is used to CC, he/she should take on the Coilskar Witch and Etherium Smuggler should be CCed by someone else as both of them uses AoE spells and WILL interrupt the shadow priest's Mind Control. The reason for choosing the witch over the smuggler is because you cannot use smuggler's spells while MCing him. Alternatively if there is a good tank, the shadow priest can pull with mind control, then fade and let the tank pick up aggro. This eliminates one original caster, and if the priest then positions himself carefully it is possible to mc another mob without much danger of being interrupted by aoe. (any group doing this should realize that any damage caused by the first mc'd mob should be negligible so as not to irrevocably pull the mobs onto the priest after the original mc'd mob dies)

Note: All group will respawn if even one of them is left standing, the configuration of the group is not guaranteed to be the same.

A viable strategy includes enslaving the Sister of Torment and using her on the final boss. This strategy does come with a caveat, if your warlock dies and she gets free your group will likely wipe, also this means on the respawn you will have to re clear the trash before Kael.

Particularly on Heroic mode this instance is very hard to complete without proper crowd control. Unless you outgear the instance, it is wise to bring multiple classes that can crowd control.

The third boss of the instance, Priestess Delrissa, can become almost impossible to kill without CC if her "miniboss lineup" happens to counter your group's setup well.

A shadowpriest is extremely effective here as he can mindcontrol the Sunblade Mage Guard, Sunblade Blood Knight or Sunblade Warlock trash mobs. This will essentially remove two mobs from every pack since the mindcontrolled mob can simply tank another one until it either dies or the rest of the pack is dead. If you're low on healing the Blood Knight can be a huge help to your group because he can cast a 16k Holy Light and has plenty of mana.

Warlocks can fear pretty much any mob in the instance. In addition they can enslave the Sister of Torment mobs. While these are not very good at tanking (they die too quick) they are an asset regardless since they can either seduce or deal decent amounts of damage to other mobs.

Mages may be essential on this instance, as they can polymorph almost any NPC, including Ethereum Smugglers (as they are humanoids). Polymorph is more valuable than sap, as it can be redone. They also can spellsteal almost every buff that trash mobs cast, this including Prayer of Mending and Seal of Wrath.

Rogues are also fairly useful, as nearly every mob in the instance is a humanoid and can therefore be sapped.

Enhancement shamans can be used to great effect on the Sunblade Magisters most humanoid pulls contain on both normal and heroic mode. Between grounding totem and earthshock they should be able to prevent pretty much every frostbolt cast while purging the stacking haste buff and taking little to no damage.

Hunters who enjoy CC (especially those with the improved trap talents from the Survival tree) can really shine in this instance. The obvious trap targets are the Sunblade Mage Guard and Sunblade Blood Knight, since they're melee mobs and will run straight for you. However, the instance does offer many good opportunities to trap casters because there are many hiding places to move out of their line-of-sight. Clever hunters can even trap multiple targets and Wyvern Sting another, which can be a big help on the notorious final trash pull.

To unlock Heroic mode for the Magisters' Terrace, you must first complete the quest chain started by Exarch Larethor, that ends with

[70D] Hard to Kill, killing Kael'thas in the process. It should be noted that unlike all other instances with a Heroic difficulty setting, Honored reputation is not required for Heroic Magisters' Terrace.

Most of the boss fights are the same as in normal mode. The Kael'thas fight is a little different in that he casts a Pyroblast one minute into the fight (won't cast it if he enters gravity lapse mode before that). During the cast time he puts up a shield (Shock Barrier, absorbs 10K damage) which makes him immune to all interrupts. The shield is vulnerable to normal attacks and MUST be taken down before the Pyroblast casts. Once the shield is down, normal spell interrupts (counterspell, shield bash, kick etc.) will stop the casting. If the Pyroblast is not interrupted it will deal upwards of 40,000 damage to the tank. Pally tanks can bubble out of the first pyroblast, and it is suggested that if dps isn't able to burn through the Shock Barrier that a warrior tank pop shield wall and last stand, it is possible that this might enable him to live through 1 pyroblast but should a 2nd come he has no recourse.

If you fail to stop the Pyroblast and your tank goes down, you can still easily finish. For at this point there is no aggro, Kael just spams the gravity effect. 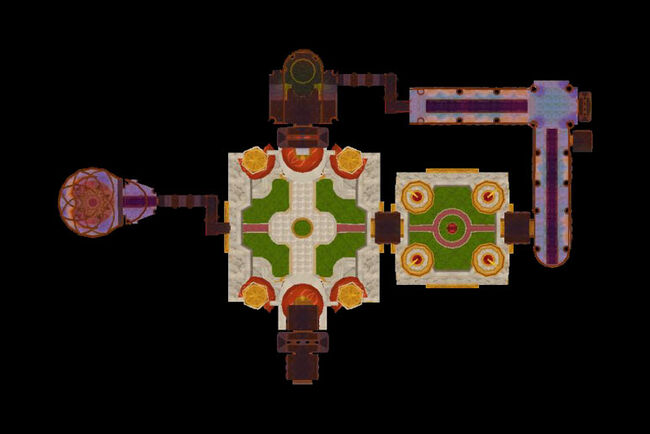 An overview of the exterior, as seen from atop the Inn of the Sun's Reach Harbor

An early design layout of the instance.

This is the only instance to contain a cut scene while playing the game. Most other cut scenes in-game happen when you first create a new character or for a few specific quests.

A standardized abbreviation for the instance has yet to be decided upon. Among the various player-created abbreviations seen in game are the following: MgT, MsT, MrT (presumably after Mr. T), MT (causes ambiguity problems with Mana-Tombs), QD5 (Quel'Danas five-man), SPLAT5 (Sunwell Plateau five-man), Terrace, and MagT (differentiated from Magtheridon by the capital T at the end). Blizzard Community Manager Drysc commented on the official forums: "I think MST makes the most sense, Magisters' Terrace. But MGT works too."[2] For German players the abbreviation "TdM" is common. "Bancal" is the most common abbreviation for Spanish players.

It is also worth noting that this dungeon is kind of like a "best of" The Burning Crusade. The bosses each take something from one core aspect of Burning Crusade, but tune it down (or keep it at a similar difficulty). The First boss, Selin Fireheart, is very similar to Warlord Kalithresh, a 5-man final boss. The second boss, Vexallus, is similar to The Curator, a boss from the 10-man, Karazhan. The 3rd boss, is similar to Moroes, or even more so (due to the difficulty to tank it) a 5v5 Arena. And the final boss Kael'thas, is similar to a fight from a 25-man raid. Thus this dungeon takes the core aspects of 5-man dungeons, 10-man dungeons, PvP, and 25-man endgame, and tunes it down to a 5-man encounter.

Retrieved from "https://wowwiki.fandom.com/wiki/Magisters%27_Terrace?oldid=2838213"
Community content is available under CC-BY-SA unless otherwise noted.