Magelo was founded in 2001 to offer initially a system to make character profiles for Everquest gamers. Since May 2008, Magelo also provides services for the World of Warcraft community such as character profiles, dynamic signatures, a game database and gear planner.

Magelo's main features like the profile, signature and gear planner are available for all users. You can import your characters directly from the Armory or synchronize them with the Magelo Sync client.

The Magelo profile is a summary of the character. Everything about the character is shown in a single full-screen page with no advertisements or unrelated items in the background. The Magelo profile displays the unbuffed stats of the character, assigning it an Archetype that fit its role. It handles Druid Forms, Death Knight Presences and Warrior Stances. It shows the character animated in 3D exactly as it is in game and is customizable (background image, color theme, music). You can also show your secondary spec profile with updated gear, statistics, 3D model, talents and glyphs.

For each character, Magelo will get you an avatar and a signature in 2 sizes to show your character in many forums or websites. They gives a quick preview of the character (3D portrait, level, race, class, server, guild info, tradeskills, talents) and they are customizable (background image, color theme, frame, statistics). They will be updated automatically anywhere you use them.

The Magelo database contains information related to the game (items, spells, quests, NPCs) and it is illustrated with animated 3D model of NPCs, armor and weapons to shows how they look like in the game.

Variety of data, such as mining, herb nodes, NPC and objects are located in 3D on interactive zone maps. Players can see indoor locations available in the area and switch between the normal and terrain (minimap) modes. Zone sample:

The item tree shows how to obtain all the raw materials necessary to get an item crafted. Item tree sample: Breastplate of the White Knight

The gear planner will audit the character gear and suggest potential upgrades based on his Archetype, class and level. As you makes gear swaps (with recommended item, gem, enchant) you will see the benefits on all stats and the differences with the original gear. Then, you can save changes as Alternate profiles to keep track on the character progression or make plans for future gear. You can even filter the upgrades by source, compare your profile to any other profile and access a Roadmap that show how to obtain the upgrades you selected (loot, merchant, recipe).

The inventory tool lets you manage all your items listed in each of your characters' bags and bank separately, outside the game. It indicates the storage location and amount carried on each character for every item and it has an advanced search ability to locate items across multiple characters.

The item comparison tool help you compare several different items together. You can add gems and enchants on the items, see item set bonuses and watch Heirloom item progression over a range of levels.

Magelo offers guild management and recruiting services. The guild leader can manage members and permissions. He can create guild recruitment announcements and import Magelo guild roster in his website. Players may also announce their candidacy for recruiting guilds directly in their profile. Magelo will match players looking for guilds and guilds looking for new recruits.

Since Magelo actively reads a computer's Random Access Memory, some people believe that it goes against Blizzard's Terms of Use. Blizzard has made no official statement either way but various GMs have stated that Magelo may or may not be against the TOU.

The following chat was posted in a Magelo forum in February 2009. 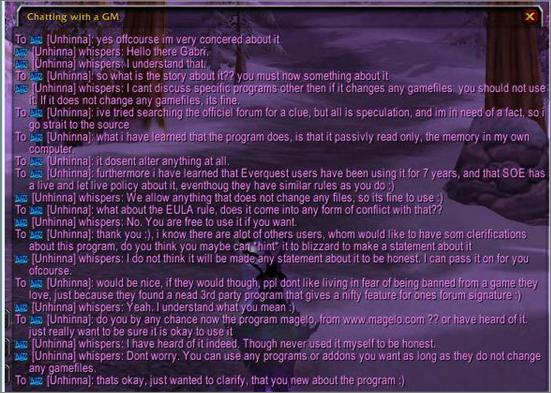 The following was posted in the WoW Europe forums in July 2008.

Any program that runs in co-ordination to World of Warcraft and potentially synchronises with the Client to Mine data from it is against the Terms of Use. I am not able to find any information on the web site to indicate how this application runs, and the processes it uses in order to gather said data, however, given the following extraction from the Legal Documentation - Terms of Use:

iii. use any third-party software that intercepts, "mines", or otherwise collects information from or through World of Warcraft;

Whilst at some point this was named on the Community News pages of our Homepage, this was quickly removed as we will not encourage or endorse what is potentially a tool that will be picked up by our Anti-Cheat mechanisms and violate the Terms of Use.

A wise Panda once said 'If in doubt, do not use it'. I can only say that this too applies in this situation.

This controversy is not something really problematic anymore as players can import their character from the Armory on Magelo since February 2010. If they feel better avoiding using the software they can simply choose the Armory option.

Retrieved from "https://wowwiki.fandom.com/wiki/Magelo?oldid=2536973"
Community content is available under CC-BY-SA unless otherwise noted.