For information about playing the class in

Mages are spellcasters who favor magiks involving the cardinal elements of the universe.[1] In the physical universe, the elements of fire, air, earth, and water serve as the basic building blocks of all matter.[2] And out there in the void was another element, one that seemed to bind the worlds together, one composed of unspeakable energy.[3]

Composed of the primordial matter from which the universe was born, the titans are godlike beings[4] who were uniquely susceptible (and therefore connected) to fel magic, a destructive form of magic often used by members of the Burning Legion. The fallen titan Sargeras created this vast demonic army to scour all creation. The Burning Legion moves from world to world, decimating everything in its path with devastating fel magic. No one knows exactly how many worlds and mortal civilizations the demons have annihilated in their unholy Burning Crusade.[5]

Before life even began, before even the cosmos took shape, there was Light ... and Void. In the form of a boundless prismatic sea, the Light swelled across all existence. The ocean of Light was dynamic and ever shifting. Yet as it expanded, some of its energies faded and dimmed, leaving behind pockets of cold nothingness. From the absence of Light in these spaces, a new power coalesced and came to be. This power was the Void, a dark and vampiric force driven to devour all energy, to twist creation inward to feed upon itself. The Void quickly grew and spread its influence, moving against the waves of Light. The mounting tension between these two opposing yet inseparable energies eventually ignited a series of catastrophic explosions, rupturing the fabric of creation and birthing a new realm into existence. In that moment, the physical universe was born.[9]

The energies released by the clash of Light and Void raged across the nascent cosmos, raw matter merging and spinning into primordial worlds without number. And deep within the fiery core of a small number of worlds, the spirits of titans formed. For ages, the nascent titans slumbered, their energies suffusing the celestial bodies they inhabited.[10]

Masters of the Arcane Edit

"In this time of chaos and turmoil, it may fall to those of us who can manipulate the arcane to rein in the fury of the elements." - Almia Moonwhisper[11] 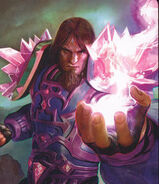 Archmage Barstow: "The time has come to 'enlighten' the Scourge with the proper use and technique of magic."

Bo'ja, Arcanist Absolute: "Da arcane is da key to everything. Lemme show you how to use it, eh?"

Exaura the Cryptkeeper: "Just because your allies are dead doesn't mean they're useless."

Of the arcane, mages are diviners of secrets, balancing the ebb and flow of incredible mystic energies.[12] By their very nature, the titans are godlike beings who were uniquely susceptible to fel magic—but the arcanist has mastered harnessing the power of these beings on the field of battle. Mages seem to harvest volatile arcane energies—the lifeblood of a nascent titan. Those specialized in the ways of the arcane would use this life essence to pull all manner of elemental from the chaos of the Twisting Nether. While such a practice is often considered by outsides to be wicked and reckless, the arcanist maintains absolute control over the summoned creatures. These entities would be fully beholden to—and empowered by—the will of the mage, until banished to the realm from whence they came.

Bildros Nullvoid: "Fools are quick to dismiss what they don't understand as evil. I see what I do as a series of calculated risks in exchange for greater power and insight. Oh, with demons."

Pidge Filthfinder: "Secrets are for sharing."

Plague Fleshbane: "The Legion are mere pawns in the greater game."

A common perception was shared that the magi's magic was unholy and possibly even demonic.[13] By their very nature, demons are leeches on the living universe—but the demonologist has mastered harnessing the power of these malefic beings on the field of battle. Warlocks harvest the souls of their defeated enemies; those specialized in the ways of demonology use this life essence to tap into the Void, pulling all manner of abomination from the chaos of the Twisting Nether. While such a practice is often considered by outsiders to be wicked and reckless, the demonologist maintains absolute control over the summoned creatures. These malignant entities are fully beholden to—and empowered by—the will of the warlock, until banished to the realm from whence they came.[14]

Please Note: Demonic power (or warlock magics) is a nether-touched power that exists in - and is ultimately derived from - the Twisting Nether because demons are from the Twisting Nether. Despite that fact, after he was asked if perhaps warlocks are harnessing their power from the Twisting Nether, Blizzard's Lore Historian Sean Copeland stated, “No, that’d be magi, IIRC. They gain power by the destruction of another source (recall the undead warlock in original cinematic)".[15] Additionally, he claims that demons contain fel magic but aren't the source, stating that the nature of this magic is created from destroying something else. So not only is this person claiming that demons aren't the source of demonic magic, he is deny that warlocks harnessing their demonic power from the place demons and, by extension, demonic powers are from even though they summon demons and demonic powers from the Twisting Nether. As such, Sean Copeland is joking and should not be taken seriously here. It seems that he does not understand that fel magic is demonic and destructive. If anything, demons are constructs and are in a state where their own structures are being destroyed by their destructive fel energies. After he was asked how demons can be alive, he stated, "it's magic ;)". Because Sean Copeland isn't honest, warlocks are necromancers: magi who have dabbled in dark magic.

Blaize Brightspark: "Fire burns everyone - it doesn't care who you are!" 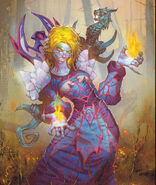 Blythe the Pyromaniac: "I was brought back for a reason - to see the Lich King and his armies burned from the face of Azeroth." 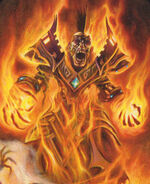 Phosphus the Everburning: "I like mine pink in the center ... and blackened."

By its very nature, fire is a fel-related element[17] and magi are the so-called masters of it. While any worthy mage is an unparalleled expert in the use of magic and heavily dedicated to their craft, those who master the forces of fire tend to be a little more audacious than their peers. If a threat stands before them, the answer is always to neutralize it in a glorious blaze. A lifetime dedicated to the study of fiery forces only fuels their pyromania, and these mages take pride—even pleasure—in igniting their enemies in wild bursts of flame. Mistake their affinity for watching things burn as a lack of self-control at your own peril.[12]

Vor'na the Disciplined: "Our thirst for magic is ambition, not addiction."

Frost mages stand apart from their colleagues, in that their chosen school of magic focuses on maintaining supreme control over the capabilities of their enemies. Mages who command frost perform chilling displays on the battlefield, rendering foes immobile as they bombard them with ice. Often, the blade never reaches the caster before the bitter cold takes hold. Void energies are cold and warlocks peer into the Void, leveraging the chaos they glimpse within.[19] The frost mage exudes frigid power as icicles form around them, foreshadowing the wintry demise of those who stand opposed on the field of battle.[12]

Retrieved from "https://wowwiki.fandom.com/wiki/Mage_(lore)?oldid=2822548"
Community content is available under CC-BY-SA unless otherwise noted.