This article is about lore about the Mag'har tribes of orcs. For the

The mag'har (uncorrupted, brown orcs) are a faction of the remaining orcs of different orc clans that had escaped the corruption of the Burning Legion.

At some point, apparently prior to the Blood Pact with Mannoroth, a virulent plague known as the "red pox" spread throughout the Horde, and Geyah established a quarantine village in Nagrand, homeland of the Warsong clan.[1] For reasons unclear, the orcs managed to avoid the corruption that plagued even their parents and the rest of the world, though it is quite possible that the very plague that separated them from the rest of the horde saved them from corruption. The orcs, and Nagrand, come to be referred to as "MagHar" — which in Orcish means, literally, "uncorrupted". They eventually recovered and constructed the stronghold of Garadar.

The mag'har have never been corrupted by either Mannoroth or Magtheridon, and thus remained untouched by the bloodlust. Unlike their former clanmates who live in the ruins of their once-mighty holds, the mag'har are made up of members of different orc clans who escaped corruption. The current leader of the mag'har, venerable Greatmother Geyah, is an old and wise orc, yet she has recently fallen extremely ill. Garrosh Hellscream, son of the mighty Grom Hellscream, serves as the mag'har's military chief, aided by Jorin Deadeye, son of the venerable chieftain of the Bleeding Hollow clan, Kilrogg Deadeye. Dranosh Saurfang, Aggra, and Ishi are also mag'har.

As Grom did not drink Mannoroth's blood and instead killed him in the alternate timeline, all orcs except for Gul'dan and his followers kept their brown skin.

For the information on the playable allied race, please see Mag'har orc (playable).

Mag'har will appear as a playable Horde allied race in Battle for Azeroth.

The architecture of the mag'har seems to be based off the buildings from Warcraft: Orcs & Humans. This suggests that during the First War, orcs used similar building types to those back at home on Draenor. However, over time, their buildings become more and more "warlike" and nomadic. Those back on Draenor/Outland never changed their building style. 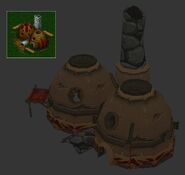 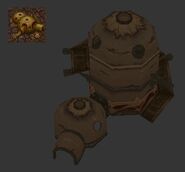 Retrieved from "https://wowwiki.fandom.com/wiki/Mag%27har?oldid=2845140"
Community content is available under CC-BY-SA unless otherwise noted.