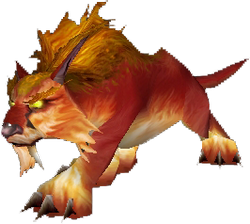 A lynx is a red or brown colored big cat native to Eversong Woods and Ghostlands, but can also be found in Netherstorm, Blade's Edge Mountains, and Isle of Quel'Danas. They come in Springpaw and Ghostclaw varieties. The Ghostclaw were apparently affected by the undead Scourge during their invasion and what they did to the Ghostlands to the south. The lynx may be a native to Quel'Thalas, but other speculation leads some to believe that they may have been nightsabers or panthers that came with the highborne during their exodus.

Lynx have a short tail, characteristic tufts of black hair on the tips of their ears, large, padded paws and long whiskers on the face. Under their neck, they have a ruff which has black bars resembling a bow tie although this often not visible.

They drop Lynx Meat that can be cooked with the Lynx Steak recipe.

An interesting note is that the Lynx used the same Model as the night elf Druid's Cat Form, before the patch 3.2 Cat and Bear form revamps.

Compare the Night Elf Cat Form.
Add a image to this gallery

Retrieved from "https://wowwiki.fandom.com/wiki/Lynx?oldid=2751609"
Community content is available under CC-BY-SA unless otherwise noted.