Love is in the Air

"Love is in the Air" is a seasonal event that takes place around Valentine's Day (around first week of February and lasts about 2 weeks). The first "Love is in the Air" event occurred in 2006, and was repeated each year since. 2010 saw this event significantly changed. See Love is in the Air 2009 for details of the previous version of this event. In 2012, as one of their most romantic gestures (/sarcasm), Blizzard announced some specific customer support policies for this event.

Love and adoration are in the air in the major cities of Azeroth… and in celebration of the occasion, you’re invited to share candy, perfume, and gifts with guards, townsfolk, and other players for special rewards.

However, a strange "love sickness" seems to cloud the hearts of many of Azeroth’s people. Is this widespread incident simply an outbreak of amore? Or will you and your fellow brave adventurers uncover a dark secret behind this plague of passion?

From the old official site:[3]

Something is in the air in the major cities of Azeroth. Some call it love, and some just call it friendship and admiration. Whichever it is, many guards and townsfolks now spend their days giving and receiving tokens and gifts to other amorous citizens.

The more skeptical, however, are suspicious of the strange "love sickness" clouding the hearts of so many. Will this widespread occurrence be simply taken as a recent outbreak of amore? Or will our brave adventurers find a sinister plot behind the source of this plague of passion? Only time will tell...

It appears that Blizzard moves the dates of this event to happen around the real-life Valentine's Day on which this event is based. However, the date ranges sometimes vary whereas Valentine's Day is always on February 14th. When the event was introduced it lasted for 6 days, but was increased to roughly 2 weeks in 2010.

With the increased level cap in

comes new places to farm for

[Lovely Charms]. Some notable places include

The Crown Chemical Co. is in town! Items can be purchased from the Lovely Merchant in each major city for

[Love Tokens]. Tokens can be purchased with

[Lovely Charm Bracelets] and are rewarded by several quests. The bracelets are created from ten

To collect Lovely Charms, players must have the

[Lovely Charm Collector's Kit] in their inventory, which is available from Kwee Q. Peddlefeet. Then go kill mobs and/or players that would grant honor or XP. You need not loot these mobs to gain the Lovely Charm; it will appear in your inventory automatically.

There are several daily quests and a quest chain during the holiday.

A daily quest from Kwee Q. Peddlefeet offering a gift (a Lovely Charm Bracelet) to the leader of the capital city. Receive 5x

[Love Token] and a consumable card that provides a buff to a core stat for an hour.

Throw out 10 samples and receive 5x

For 2010, the Love is in the Air event now also features an event boss:

As of 2011, to queue for the dungeon, you can use Dungeon Finder or talk to the Steamwheedle Shyster in Stormwind City (outside Trade District Auction House) or in Orgrimmar (near Grommash Hold). You will receive a

[Heart-Shaped Box] for defeating the daily holiday boss (and his helpers).

[78-80] Man on the Inside leads you to Shadowfang Keep where the Crown Chemical Company set up a base of operations. There you can find a goblin agent who gives you

[75-80D Daily] You've Been Served. When turning that quest in at Apothecary Hummel, he and his two companions will aggro. They are all level 82 (elite) and have about 260k health. When the proper strategy is followed, these should not pose a problem for a well-geared 5-man group.

During the 2009 event of "Love is in the Air", the [Bouquet of Ebon Roses] was introduced for those characters with access to Northrend.

The [Bouquet of Ebon Roses] showers the character with black rose petals and drops from:

Due to an issue not allowing the Ebon Roses to get the Fistful of Love achievement as intended, there was a hotfix that replaced them with the [Bouquet of Red Roses].[7]

The meta-achievement for Love is in the Air is

[Fool For Love]. It requires the completion of most of the achievements listed in the table below.

*Not a requirement of the meta-achievement 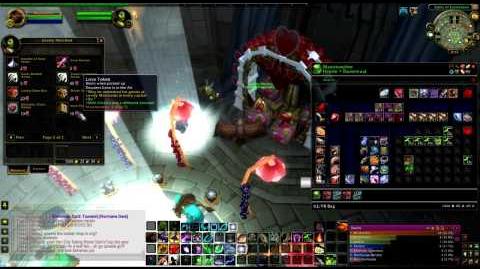 Love Is In The Air Achievement Guide - Cataclysm
Circa

In 2007, Blizzard created a Burning Crusade commercial that featured the "Love is in the Air" event as well as the new jewelcrafting profession. From the official website, the ad was described as follows:[8]

What do you get the blood elf who has everything? This Valentine's Day, make it an epic jewel! Yes, the industrial empires of Azeroth aren't about to let anyone escape the relentless marketing campai- er, bloom of true love associated with this time of year! Take a look at this new commercial but be warned that you may be struck by a sudden impulse to spend all the gold you've saved for your epic mount.

WoW Official Game Site (US) Love is in the Air

WoW Official Game Site (EU) Love is in the Air

Official WoW Site (US) Can You Feel it? Love is in the Air Has Begun! by Blizzard Entertainment February 7th, 2017

Web.Archive.org Love is in the Air (US) archive page

Web.Archive.org Love is in the Air (EU) archive page (En)

Retrieved from "https://wowwiki.fandom.com/wiki/Love_is_in_the_Air?oldid=2855863"
Community content is available under CC-BY-SA unless otherwise noted.