Lothraxion was one of the Nathrezim that were once demonic slaves to the Burning Legion until they were infused by the Light, freeing them from their demonic corruption. Seeking redemption, Lothraxion became a Paladin of the Silver Hand and is found at Sanctum of Light, the paladin order hall in the Eastern Plaguelands.

Lothraxion was one of the Nathrezim species that came from the broken world of Nathreza that had fallen under the hands of the Burning Legion. Like every other Nathrezim, Lothraxion joined the Legion. However, at some point, a number of Nathrezim, including Lothraxion himself, were infused with the light and freed from their demonic corruption. Now seeking his path to redemption, Lothraxion and his freed kin joined the Army of the Light, a formed organization that was led by Turalyon and Alleria Windrunner that had recently disappeared.

This section concerns content exclusive to Legion.During the time when the Burning Legion had begun its third invasion on the world of Azeroth and had taken the Broken Isles, Lothraxion was sent by his friend Turalyon to stop Balnazzar, who had been attacking the priests of Netherlight Temple, and accompanied the Knights of the Silver Hand to aid the priests in their defense against Balnazzar and his minions. Just as Balnazzar began to summon more demons to reinforce, Lothraxion aided the Highlord of the Silver Hand to defeat the Dreadlord. After Balnazzar was defeated, Lothraxion ventured across the Eastern Plaguelands towards Light's Hope Chapel and joined the Silver Hand, making him an honorable Paladin and "Champion of the Light".

Lothraxion is a major character regarding the events of the invasion of Argus by the forces of Azeroth. He has been part of the Grand Army of the Light for eons and of great aid to both Turalyon and Alleria in their centuries long battle against the Burning Legion. He stands watch from the Vindicaar while occasionally venturing to to Argus to act in a diplomatic capacity, confirm findings, or prioritize missions. 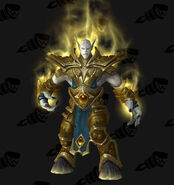 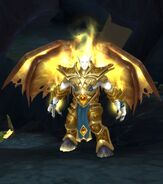 At Krokul Hovel on Argus
Add a image to this gallery 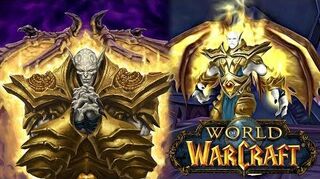 Edit to the right of the section title.
Retrieved from "https://wowwiki.fandom.com/wiki/Lothraxion?oldid=2860724"
Community content is available under CC-BY-SA unless otherwise noted.