Lord Marrowgar is the first boss of the Icecrown Citadel raid. Pieced together by the Lich King from the bones of a thousand vanquished adventurers, he is the guardian of the Frozen Throne within The Spire and wields the power of the throne itself.[1]

This boss tests if the raid is able to survive the Icecrown Citadel raid. If the boss wipes the raid, then the raid will probably not survive the other Citadel bosses. His trademark attacks are Bone Storm and Bone Spike Graveyard. He has an enrage timer (10 min), which is a lot of time, so it is not exactly a DPS race as much as a Battle for survival.

Lord Marrowgar is a fairly simple encounter that should not give any guild prepared for Icecrown Citadel much difficulty.

Tanks need to stand on top of each other to soak Bone Slice. If you are short on tanks and the raid has plate DPS available, one can be put in front of the boss with the tanks to help soak the Bone Slice damage. If said DPSer has a tanking set, equipping a piece or two to increase their HP is an option should they be taking too much damage. Note that the tanks will take substantial damage during the fight - using an off tank of this sort is not advised, as it will make healing even more difficult, although it is better than insufficient tanks.

It is entirely possible to single tank Marrowgar, in 10man, should the tank be sufficiently geared. In 3.3(a) Marrowgar's damage was further reduced, making this an even more viable strategy. Be advised that although this frees up another DPS in your 10man raid, the tank will take heavy damage.

The key to the fight is managing the transitions between the Bone Storms and going back to the Bone Graveyard phase. You have 10 seconds from the end of Bone Storm until Lord Marrowgar starts casting Bone Slice again (until then he simply melees his target) - the tanks need to pick him up and position themselves together in that time. (The 10 second grace period also applies to the beginning of the encounter, counting from when he is first aggroed, giving the tanks time to set themselves up.)

Tanks should avoid sandwiching themselves between Marrowgar and a wall. The trails of fire need a place to land behind the tanks, or they will be cast inside the hit box, affecting the tanks.

Lord Marrowgar has a gigantic hit box You will want to have a dedicated 'spike team' - chosen dps members who will kill the Bone Spike Graveyard as soon as it impales a player. If you're doing 10-man without a dedicated spike team, the melee need to be grouped near the healers until you out-gear the encounter, or are attempting his heroic mode. Melee can choose to stay close to the boss to avoid the Coldflame, which starts 8 yd from boss, and still attack the boss.

Ranged DPS, or nearby melee, should immediately free players impaled with Bone Spike Graveyard. If the raid has an abundance of melee, members should stay relatively close together to reduce travel time. Bone Spikes should die within 3 seconds (two GCDs); any longer and you will have issues. In addition, it is confirmed that Paladin ability Hand of Reckoning removes Bone Spike Graveyard, and it's most likely that similar abilities remove it too.

Coldflame is a single line of frost that runs radially outward for 8 yards. Touching it inflicts a large amount of damage. Since it moves in a straight line, melee can sidestep out of its way, while ranged players can avoid it entirely. Because it starts a small distance away from Lord Marrowgar, melee can also avoid it by staying in very close, but only do this when Lord Marrowgar is not casting Bone Storm. In heroic, touching the line of frost will apply a bleed effect.

Cold Fire during his non-Bone Storm periods will be directed at a given person, thus ranged should spread out radially, preventing more than one from having to move from any given spawn.

Every 30 seconds Marrowgar will execute Bone Storm. This whirlwind attack cannot be avoided, and damage is dealt every two seconds based on your proximity to the boss as he spins. The closer you are, the more damage you take. Additionally, in heroic this will also leave a bleed effect on anyone hit by it.

While in his Bone Storm Lord Marrowgar will randomly target and charge a raid member. When he reaches them he stops moving for around six seconds before targeting another random raid member. Every time Lord Marrowgar reaches his target and stops he will fire four lines of Cold Fire along the semi-cardinal points (NE, NW, SE, SW - they form an X). Unlike during phase 1, the cold flame lines start directly underneath him. After his fourth target the Bone Storm will end.

Tanks will need to be close by to absorb Bone Slice when Bone Storm ends.

During the Bone Storms, every raid members takes damage. People who don't move when they're targeted by the boss during Bone Storm will be taking full Bone Storm damage in addition to Cold Fire damage from up to four separate Cold Fire effects, which will probably result in their death.

Note that Lord Marrowgar has a red positioning reticule below him. Stacking your entire raid (with the exception of the three tanks and any hunters) on the back edge of the reticule does three things:

The raid must disperse during Bone Storm. Bone Storm damage is negligible, but Priests need to be mindful that Inner Fire charges are depleted by this ability. Stay mobile, and re-collapse to the rear of the positioning reticule once the tanks regain control after it stops.

Note that tanks do not take damage during the Bone Spike Graveyard cast, which can be very handy for moving into position or catching up on healing.

Tips: During bone storm try only to move to avoid the cold flame, it is easy to heal through the bone storm. Simply keep an eye on Lord Marrowgar to see whether or not you will be in the way of the cold flame

The entire raid (except the tanks) collapse into a single group behind Lord Marrowgar within the red circle visible on the ground when he is targeted. Hunters should stand as close to this group as possible, but still be far enough away that they can still shoot. Communication from any Hunters is important should they get hit with Bone Spike, the DPS can quickly react to it and make adjustments. This strategy has the bonus of being able to very quickly bring players out of the Bone Spikes, and if everyone is within the red circle, any Cold Flames launched at players will miss, as the flames don't land on the ground until they are just outside of the circle.

As a downside, players must quickly move out several seconds before Bone Storm begins otherwise the raid will take heavy damage. Players must also watch their positioning to make sure they don't stray into the front of the boss and risk getting hit with the Bone Slice.

The same strategy you use in normal mode should work in heroic mode, as the fight is largely unchanged though with drastically increased Bone Storm damage. The cold flame lasts longer and if you use a strategy where everyone stands inside Lord Marrowgar hitbox, your tanks will need to work around 3 or more cold flames up. During the bonestorm phase, Lord Marrowgar will continue to cast bone spike. This could lead to easy deaths if the bone spike sits on top of a cold flame, with Marrowgar spinning at the same location. Players caught in this situation need to be vocal and ask for a healer cooldown to survive.

This section needs to be cleaned up to a higher standard of quality. Reason: Need to put into galleries. 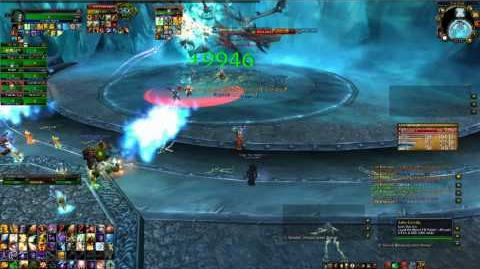 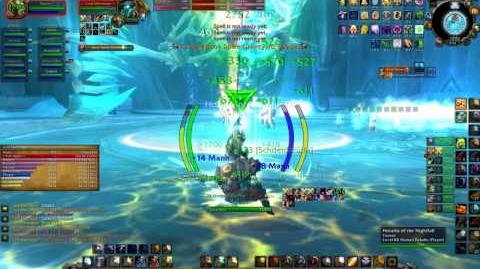 Tremor's Strategy vs. Lord Marrowgar 10-man
Add a image to this gallery 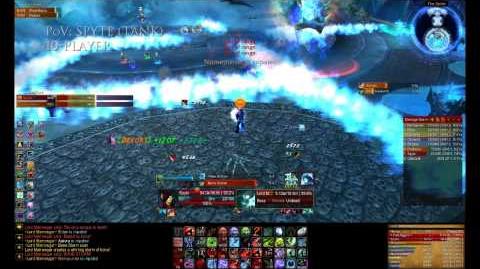 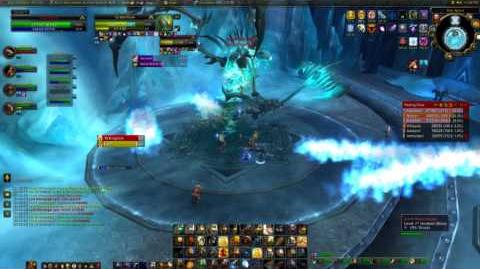 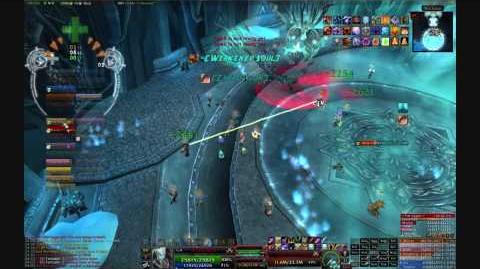 How to Lord Marrowgar (25 Man) 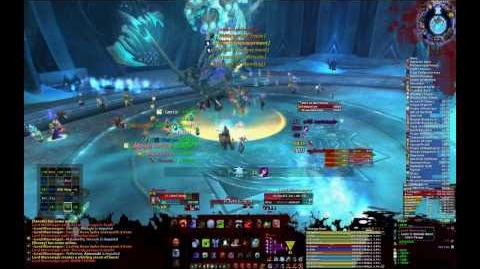 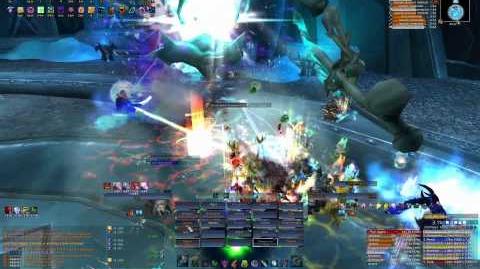 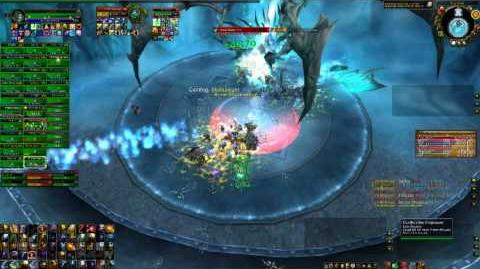 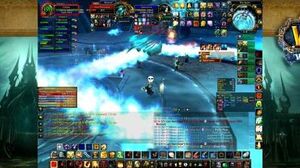 Due to not being allowed to show bones in-game in China, Marrowgar has a completely unique look on their servers.


One of his quotes, "I see only darkness," is later spoken by The Lich King upon his defeat.

See this subject on the Hearthstone wiki: Lord Marrowgar

Retrieved from "https://wowwiki.fandom.com/wiki/Lord_Marrowgar?oldid=2838155"
Community content is available under CC-BY-SA unless otherwise noted.