Lor'themar Theron is the Regent Lord of Quel'Thalas,[1] and was the leader of the blood elves of Azeroth in the absence of Prince Kael'thas Sunstrider. After Kael'thas' betrayal and eventual death, Lor'themar has become the sole leader of his people and seeks to lead them to a brighter future.

In the Second War, Lor'themar was second-in-command to Sylvanas Windrunner, Ranger-General of Silvermoon,[2] he defended Quel'Thalas against the invasion of the Horde,[3] (ToD 228) then he accompanied Turalyon and the Alliance forces to Capital City and helped them to defend themselves against the orcish threat.[3] (ToD #?))​)​)​

Many years later the traitorous Prince Arthas, having already ravaged his own homeland, the Kingdom of Lordaeron, led the undead Scourge against the high elves. The Ranger Corps fought Arthas at every turn but were pushed further and further back towards their capital.[4] Sylvanas Windrunner was slain by Arthas outside Silvermoon, the city was sacked,[5] and King Anasterian and the entire Convocation of Silvermoon were killed battling the invading undead. After Sylvanas' death, Lor'themar assumed temporary leadership of the high elves and, along with his much-reduced forces, remained in Quel'Thalas after the fall of Silvermoon as a resistance to the Scourge remnants.[2]

Not long afterwards, Prince Kael'thas returned from Dalaran to proclaim the rebirth of the former high elves as the blood elves, or sin'dorei, in honor of their fallen brethren. Chosen as Regent of Quel'Thalas, Lor'themar was commanded to "safeguard the land and seek a cure for their people" while Kael'thas took a group of the blood elf forces to join the Alliance resistance against the Scourge in Lordaeron, led by Lord Garithos. His old friend Halduron Brightwing, Ranger-General of Silvermoon, aided him in this task.[6]

After the Third War, the traitor Dar'Khan Drathir pursued Anveena Teague, the current avatar of the Sunwell, into Quel'Thalas. Lor'themar and Halduron rallied the blood elves in alliance with the band of adventurers and blue dragons who had joined together to protect Anveena and threw back the Scourge. While Lor'themar and Halduron fought against Dar'Khan's undead minions, their comrades were able to awaken Anveena to her true nature: she is, in actuality, an artificial being created to house the reaccumulation of the Sunwell's energies. Upon realizing this, she unleashed her powers upon Dar'Khan and the Scourge, destroying them entirely. Anveena elected to remain in the Sunwell Grove to help restore it, and Halduron and Lor'themar pledged to aid her, as well as keeping her existence a secret.[7] Sometime after, Grand Magister Rommath arrived as herald of the prince, bringing the message that Lor'themar was to prepare the blood elven people to come join their prince in the promised haven of Outland.[6]

In a discussion with Halduron, Lor'themar revealed his past with Dar'khan Drathir. Back when Lor'themar was a Ranger Captain, he befriended Drathir who used Theron's trust to allow the Scourge to reach the Sunwell. Lor'themar held himself personally responsible for this and swore revenge on Dar'khan.

This section's content needs citations, references, or sources.
Dar'Khan Drathir managed to survive the fury of Anveena and again he had intentions to steal the power of the Sunwell.[8] Magister Kaendris sent Horde troops to defeat Dar'Khan, and after his defeat Lor'themar sent a letter to Thrall in which he requested an equal seat with the rest of the Horde.[9]

Kael'thas later returned to Silvermoon City with felblood elves and the kidnapped M'uru. Lor'themar told his people that they would endure despite the betrayal of Kael'thas. Also, the restoration of the Sunwell following the banishment of Kael'thas meant that the fount of magic had returned.

What happens after this point is unknown. Currently, Lor'themar leads Quel'Thalas as Regent Lord of Silvermoon, and all of the sentries – which had previously said that Kael'thas would lead them to glory – would correct themselves and say that it would be Lor'themar who would lead them.

This article or section includes speculation, observations or opinions possibly supported by lore or by Blizzard officials.*
It is speculated that he may be crowned King of Silvermoon, or that the Convocation of Silvermoon may be restored, only time will tell.

Some kingdoms have a period of allotted time that must pass before a regent or steward may be crowned in order to allow any rightful heirs to appear. It is unknown whether Silvermoon had such declaration or not, but if so, this could be the reason Lor'themar has not yet been crowned.

Lor'themar Theron <Regent Lord of Quel'Thalas> is a level ?? quest giver located in Sunfury Spire in the blood elf capital of Silvermoon City.

Dar'Khan Drathir in Deatholme, Ghostlands, players turn in [his head]​​​ to Lor'themar; blood elves are given a letter from Lor'themar to deliver to Thrall, informing him that Dar'Khan had been defeated and that the blood elves requested an equal seat at the table with the rest of the Horde. Players first go to the Undercity to obtain a seal from Sylvanas, before continuing to Orgrimmar.

He ends the following quests:

This section concerns content exclusive to Wrath of the Lich King.Lor'themar Theron is seen at the Sunwell during the quest to restore Quel'Delar. When a non-blood elf player submerges the sword in the Sunwell's water Lor'themar thanks the player for returning the sword to its rightful owners. He then attempts to take Quel'Delar only to be rejected by the sword, knocking him away and taking a large portion of his health. For blood elf players Lor'themar praises the player for his or her part in restoring the blade.

This section concerns content exclusive to Cataclysm.With Amani Empire reborn, Halduron Brightwing gathered his forces in order to stop the Amani. Vol'jin and Vereesa Windrunner came to Halduron's aid, when Lor'themar learned that Vereesa entered Ghostlands, he sent a Silvermoon Messenger who said that Lor'themar demands to know why that "exile" entered Quel'Thalas.

He was also given a new model, new quotes, and his own voice actor.

This section concerns content exclusive to Mists of Pandaria.Lor'themar was summoned to Pandaria by Garrosh Hellscream, he left with the Reliquary and the Blood Knights. Lor'themar is seen at Shrine of Two Moons alongside Garrosh, Malkorok and Ellendra Palescorn. When finding out about a strong mogu presence in Kun-Lai Summit, Lor'themar sends an adventurer to fight their way through the Valley of the Emperors. Lor'themar wanted to capture the mogu leaders before Garrosh - Lor'themar considers Garrosh's actions disloyal at this point.

Lor'themar became very unsatisfied with blood elves' position in the Horde, and the way Garrosh treated them (in a way similar to that of Garithos several years ago). Lor'themar talked with Varian Wrynn about reaccepting blood elves in to the Alliance.

Sometime later, Garrosh organized an attack on Darnassus in order to steal the Divine Bell from the Alliance, that led to the blaming of the blood elves and sabotaging Themar's diplomatic efforts. Eventually, Jaina Proudmoore found out that the Horde used portals from Dalaran to reach Darnassus, furious Jaina began to "purge" the Horde from Dalaran (including the sin'dorei Sunreavers). Luckily Aethas Sunreaver and few other escaped with the help of Grand Magister Rommath and an adventurer. After these events, Lor'themar's only option was to stay in Horde and try to stop Garrosh.

Rise of the Thunder King

Lor'themar and his newly founded Sunreaver Onslaught traveled to Isle of Thunder. On the isle, blood elves formed an alliance with the Shado-Pan. During his mission Lor'themar encountered Jaina Proudmoore, Vereesa Windrunner and their forces, Jaina and Lor'themar began to accuse each other, but Taran Zhu stated that they should focus on a greater threat.

Blood elves used the energy of Dark Animus to empower blood golems as an advantage to their troops.

Together with Lorewalker Cho and Jaina Proudmoore, Lor'themar walked into the Vault of Y'Shaarj where they found Gorehowl, Garrosh's axe.

Lor'themar, Sylvanas Windrunner, Varian Wrynn, Jaina Proudmoore and their forces struck at the Bladefist Bay. During the battle, many of the blood elves died, Sylvanas told Theron that she can revive them as the forsaken. Lor'themar refused to allow that, but without delaying Sylvanas revived fallen humans.

When capturing the bay, Theron and Sylvanas faced Galakras and Warlord Zaela, Zaela was successfully defeated so that Theron could reach Vol'jin and Baine. At the end of the siege, Theron is seen with other leaders of the Horde (except Ji Firepaw who was badly injured).

This section concerns content that is out-of-date. Reason: Probably needs an update for

Mists of Pandaria or later.
Lor'themar, Rommath and Halduron's close proximity to one another can be misleading as well as intimidating for a small raid. Rommath is of no real threat to the raid, seemingly unbuffed since Lich King went live, he still uses no abilities at all and can be just tanked to the side during the fight. Halduron is a bit tougher and uses a few moderately powerful abilities but is easily dispatched only having half the health pool of Rommath.

It's good for a tank to hold Lor'themar with two to four healers depending on gear, all mana users should be standing more than 30 yards away to avoid Lor'themar's Mana Burn ability. This fight is the apex of a DPS race in terms of Alliance PVP, Horde players from The Undercity, Dalaran, and Shattrath are capable of teleporting en masse directly to Sunfury Spire and thrashing even a large raid, CCing and picking them off can sometimes doom a raid due to lack of DPS on Lor'themar. That said it's best for players to start using AOE abilities if the Horde attempt to intervene. PVP trinkets are a must for this fight in order to deal with Lor'themar's Mass Charm spell.

With luck, subtlety, and enough concentrated DPS Lor'themar will fall, from there the raid has done it's job, if they are capable of killing whomever remains the raid can see a good sum of gold depending on the number of players.

It is stated that Lor'themar Theron was second-in-command to Sylvanas Windrunner,[2] however there aren't any sources that state him being Ranger-General of Silvermoon, even Dark Factions shows Halduron being chosen after Sylvanas' downfall. 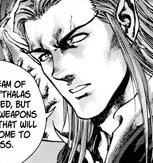 Lor'themar lost an eye during the undead siege.

Lor'themar's World of Warcraft model prior to patch 4.0.1. 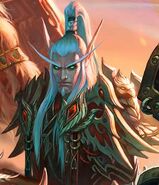 Lor'themar in all different apprences and ages. Fan art by Assey Westfall

Retrieved from "https://wowwiki.fandom.com/wiki/Lor%27themar_Theron?oldid=2855110"
Community content is available under CC-BY-SA unless otherwise noted.