The Terrestrial Watchtower, Halls of Lightning

Loken appears in World of Warcraft as the final encounter in the Halls of Lightning.

His death is the objectives of

[80D] Whatever it Takes! in which players are sent to slay him and take his tongue.

In order to reduce the damage taken from these two abilities, correct positioning and movement is required. The Pulsing Shockwave forces the group to generally stay close to the boss, but whenever he starts casting Lightning Nova (which is announced by an emote), players must run away 20 yards. The group needs to agree beforehand on a run path.

Moving on the stairs has the general disadvantage that it can cause line of sight problems for the healer. For this reason some groups prefer to run from side to side on the platform where Loken starts (there are pillars on each side of him as reference points).

This boss ability has the potential to cause severe damage to the group when people stay close together. If the initial target gets the debuff and all others are within 10 yards, the probability is very high that at least one other player gets the debuff, leading to a nearly neverending chain of Arc Lightnings. To avoid this people need to stay 10 yards apart from each other at all times (this partially conflicts with the positioning required to avoid Pulsing Shockwave). Alternately, players with the debuff can try to run away from the group.

The problem with running around is that it greatly reduces both healing and DPS, and may cause confusion. So if the healer is able to sustain about 3600 hitpoints healed per second for two minutes, all group members have over 14k health (the tank over 25k), and some form of nature resistance is available, it's possible to simply stay in melee range of the boss and not move at all. The healer in this case must AoE spam heal. This variant works particularly well with a Shaman healer (Riptide buffed 4 jump Chain Heal plus Nature Resistance Totem), quite a few groups with shaman healers report success killing Loken in under two minutes for the

Timely Death achievement using this tactic. Average as of patch 3.3 is around 30 seconds using the random dungeon finder.

On Heroic level, this should be preferred tactics when all members have 19k health (shield absorption incl.) or better (tank about 30k+). AoE healer a must, preferably priest with Spirit of Redemption talent, since the fight should be very fast (2mins or less = 3 Nova blasts). Often a Paladin's Judgement of Light can handle most of the Pulsing Shockwave's AoE, assuming that players stand at minimum range. Always good with 2 rezzers to rezz priest, since there will will be casualties in last Nova blast. If party members are below 16-17k at blast they will die. Highly geared players, especially with Heroism, can blast Heroic Loken in less than 30 seconds, in which case they only need to worry about one Nova.

If the healer sports some integrated self-heal (Paladin or Priests) the following tactic may be appropriate: Loken is kited on his platform as in the standard tactic. The healer is placed 20 yards away from both tanking spots, resulting in a triangle: the two tank spots are two corners of the triangle, connected by the 20 yard run path, the healer stands on the third corner of the triangle, 20 yards away from both other corners. This way, the healer continuously takes damage from Pulsing Shockwave which must be healed through (abilities like Beacon of Light or Binding Heal facilitate this).

Intro
I have witnessed the rise and fall of empires... the birth and extinction of entire species... Over countless millennia the foolishness of mortals has remained the only constant. Your presence here confirms this.
My master has shown me the future, and you have no place in it. Azeroth will be reborn in darkness. Yogg-Saron shall be released! The Pantheon shall fall! 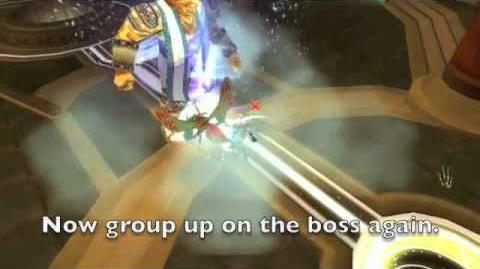