Buried in Liu Lang's Final Rest in the Wood of Staves, Wandering Isle

Liu Lang was the first pandaren explorer. According to various sources, including the Legacy of Liu Lang and the stories told by Lorewalker Amai, his history goes something like this:

Liu Lang set out to explore the world on the back of a large turtle, Shen-zin Su. At first the turtle was so small that only he could fit atop it; over time Shen-zin Su grew to be enormous. He could take Liu Lang and, eventually, other pandaren adventurers with him. The giant turtle only ever spoke to Liu Lang.

Liu Lang and the turtle explored far and wide, returning home to Pandaria once every five years. He never needed to know his way back, for Shen-zin Su always knew the beach he had been hatched on. After a lifetime of travels, helping other pandaren explore, and having many children, Liu Lang returned to Pandaria one last time, but this time no one wanted to journey with him. He and Shen-zin Su set out into the ocean.

The giant turtle, now so big as to be called the Wandering Isle, hosted an enormous pandaren population upon its back. Lush forests and buildings dotted its entire shell. Liu Lang said farewell to the turtle, wandering into the Wood of Staves.

There, he peacefully died, becoming one with the wood, as other notable pandaren would do thereafter at the end of their time. His grave[18, 53.3] can be found within the Wood. 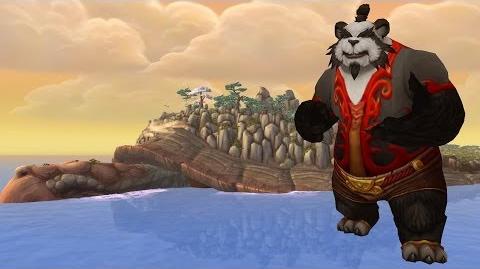 Retrieved from "https://wowwiki.fandom.com/wiki/Liu_Lang?oldid=2803695"
Community content is available under CC-BY-SA unless otherwise noted.