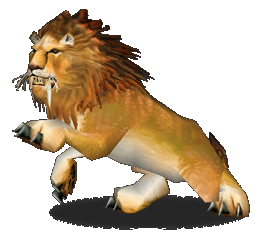 Lions are large, carnivorous cats. In World of Warcraft, lions are common predatory beasts in central Kalimdor. As predators, lions tend to be hostile and will attack those who approach them. Lions live for 10–14 years. Males seldom live longer than 10 years, as injuries sustained from continual fighting with rival males greatly reduce their longevity.

Lions are unusually social compared to other cats. A pride of lions consists of related females and offspring and a small number of adult males. Groups of female lions typically hunt together, preying mostly on large ungulates. Lions are expert scavengers. Sleeping mainly during the day, lions are primarily nocturnal, although bordering on crepuscular in nature.

Highly distinctive, the male lion is easily recognized by its mane, and its face is one of the most widely recognized symbols in human culture. Male lions are 5 to 8 feet long and weigh 330 to 550 pounds. Females are slightly smaller.[1] (MGWS 12) Some hunters choose them as their animal companion.[2] (WOWRPG 70)

Dire Lion
Dire lions are large lions found on Azeroth, especially in badlands-type areas. Their faces constantly betray a look of aggression. Dire lions are patient hunters, just like their smaller cousins, but apt to take on considerably larger prey. Many dire lions grow up to 15 feet long and can weigh up to 1,000 pounds. A dire lion attacks by running at prey, leaping, and clawing and biting as it rakes with its rear claws. It often jumps onto a creature larger than itself.[3] (MG 36)

Dark Iron dwarves under Dedrik Thunderaxe trained a dire lion to guard their cavern, attacking intruders while ignoring the dwarves themselves. The lion wore an iron collar with two large loops on the top. They fed it a myriad of delicacies, including gnolls.[4] (LoC 134-136)

Retrieved from "https://wowwiki.fandom.com/wiki/Lion?oldid=2761900"
Community content is available under CC-BY-SA unless otherwise noted.