Leyara is the night elf widow of Valstann Staghelm, the son of Fandral Staghelm who was killed during the War of the Shifting Sands. She has cast aside her former life and joined Fandral and his druids of the flame. One of her first acts is to attempt the disruption of the ritual in front of the Portal to the Firelands that would lead to the infiltration into the Firelands by the druids loyal to Malfurion Stormrage. Hamuul Runetotem later hunts her down in a vain attempt to seek vengeance for his students she killed, but she uses her flame powers to nearly kill him. After talks fail between her and Malfurion, she is then killed by a fully healed Hamuul within the Molten Front.

Married to Valstann Staghelm, she was highly devastated of learning what had happened to her husband during the War of the Shifting Sands. At some point following the Shattering that was caused by Deathwing, Leyara lived with her daughter, Istaria in Ashenvale, but that was when the Horde, which was now led by Garrosh Hellscream after Thrall had left to venture towards Nagrand, launched an assault in the land and her daughter was killed.

Even more devastated to lose two family members that she cared for, Leyara was torn with grief until she became highly disillusioned into thinking that Malfurion held his passive stance to the Horde and blamed him for this. That was when she was found by her father-in-law Fandral Staghelm, the father of Valstann, who pledged his oath to the Firelord Ragnaros and Deathwing the Destroyer. Seeking to gain her vengeance on every enemy that was responsible for both her husband and daughter, Leyara was corrupted by Ragnaros and joined the Druids of the Flame.

After joining the Druids of the Flame and seeking to rid all the enemies for the world to fall, Leyara ventured to Mount Hyjal and sought to kill Malfurion in act of revenge for what he did. During her search for Malfurion, she encounters Hamuul Runetotem, who she knows that he's aligned with the Horde. This led to a fight between her and the Tauren, in which she managed to beat him and claim that he's dead, but it wouldn't be long when Malfurion and a band of adventurers would confront her.

Meeting him face-to-face again and hoping to avenge her family, Leyara told them that her father-in-law was the true leader and excuses Malfurion to be nothing more than a foolish dreamer to himself and that he would never lead his people for victory. Malfurion saw through her despair on what had drove her to become like this and warns her that Fandral was only using her. Leyara refused to listen to his warnings and tells him that she will kill him and his companions like she did Hamuul, but that was when Hamuul arrives and tells her wrong. In her final moments before being slain, Leyara thought she killed Hamuul. 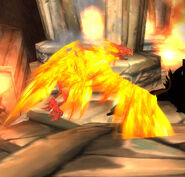 Leyara's fire hawk form, which she uses to escape.

Leyara meets her fate within the Igneous Depths.
Add a image to this gallery

Retrieved from "https://wowwiki.fandom.com/wiki/Leyara?oldid=2815247"
Community content is available under CC-BY-SA unless otherwise noted.