For the tactics against her in the Throne of the Tides, see Lady Naz'jar (tactics).

Lady Naz'jar is a naga quest giver encountered by players while they are on the Naz'jar Battlemaiden quest chains in the Shimmering Expanse. She is first found at Quel'Dormir Gardens [39, 59], but can be found in other places within the ruins as the storyline progresses, including Nar'shola Terrace. In addition to being the strongest among her fellow Sea Witches, she also possesses the most unique design in color coding of her in-game model. [29.1, 78.6]

Based on her brief skirmish with Neptulon, it can be presumed that she is the most powerful Naga Sea Witch since she was able to fight the Tidehunter in a magical duel to a standstill, right before summoning Ozumat (who also happened to be under her direct control) to capture him. Considering this skirmish, it can be speculated that Queen Azshara's current powers (as demonstrated over ten thousand years ago in the War of the Ancients, where the the pit lord Mannaroth once described the level of her powers as equal to Archimonde) are virtually godlike.

Lady Naz'jar at Nar'shola Terrace starting By Her Lady's Word. 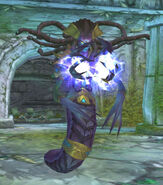 Lady Naz'jar just outside Quel'Dormir Temple.
Add a image to this gallery

Retrieved from "https://wowwiki.fandom.com/wiki/Lady_Naz%27jar?oldid=2849964"
Community content is available under CC-BY-SA unless otherwise noted.