Matriarch and Supreme Leader of the Blood Knight Order

Lady Liadrin is the leader of the Blood Knights and is currently located in Shattrath City. The Blood Knights are an order of former priests and warriors who use the Light magics from the enslaved naaru M'uru. Liadrin herself, a former elven priestess, became disillusioned with the Light following the Fall of Quel'Thalas. She had long forsaken her Light-given powers when M'uru was transported to Silvermoon following the capture of Tempest Keep. Magister Astalor Bloodsworn proposed using the naaru's powers to bestow certain blood elves with the powers of paladins. Liadrin was the first to volunteer to make use of these powers, and thus she became the first and leader of the Blood Knights.

Prior to patch 2.4, she was a level ?? quest giver located in Farstriders' Square in the blood elf capital of Silvermoon City. The quests she previously offered are now available from Lord Solanar Bloodwrath.

Fury of The Sunwell

This section concerns content exclusive to The Burning Crusade.In Patch 2.4, Kael'thas Sunstrider attacks Silvermoon with his felbloods and takes M'uru from the chamber beneath Blood Knight headquarters, transporting the darkened naaru to the Sunwell Plateau on the Isle of Quel'Danas.

Liadrin travels to Shattrath City and goes before A'dal, expressing regret for the deeds of the Blood Knights, and realizing that Kael'thas had lured the blood elves down a false path and had betrayed his people to the evil of the Burning Legion. A'dal then says that M'uru had known full well what would happen, and had accepted his path. Liadrin is confused, until A'dal reveals that the events had been prophesied by the Prophet Velen of the draenei.

Upon this revelation, Liadrin renounces the House of Sunstrider and embraces A'dal and the Sha'tar. She pledges her allegiance and her Blood Knights to the Shattered Sun Offensive, the combined force sent from Shattrath to end Kael'thas' mad bid for dominance and prevent Kil'jaeden from entering Azeroth. Lord Solanar, one of Liadrin's lieutenants, now trains aspiring Blood Knight masters at Blood Knight headquarters in Silvermoon.

This is the conversation that takes place when Liadrin meets with A'dal in Shattrath.

General Tiras'alan says: Why do you suffer the presence of this despicable Lady Liadrin? She and her followers distort the Light and make a mockery of all we stand for!
A'dal says: Patience, general. The Light embraces all who enter Shattrath in good faith. You are welcome in Shattrath, Lady Liadrin. We have long awaited your arrival.
Lady Liadrin says: Thank you for allowing me to speak, A'dal. I know many of your allies despise me and my knights for our treatment of M'uru. When he was given to us by 'Prince' Kael'thas, we believed his power would help lead our people into a new age. I've come to realize our path was a false one. We were betrayed by the man we called our prince. In his lust for power, he sent the felblood to attack us, and spirit M'uru away to the Sunwell.
A'dal says: Both our peoples suffered greatly at the hands of Kael'thas and his agents, Lady Liadrin. Your people were not the authors of their own fate, but they will die if they do not change. M'uru accepted his role long ago, knowing full well what would happen to him. Will you accept your own?
Lady Liadrin says: I... I don't understand. You -- and M'uru -- knew all along that this would occur?
A'dal says: It wasn't I who foretold it, but Velen of the Draenei:
A'dal says: 'Silvery moon, washed in blood, / Led astray into the night, armed with the sword of broken Light. / Broken, then betrayed by one, standing there bestride the sun. / At darkest hour, redemption comes, in knightly lady sworn to blood.'
Lady Liadrin says: I see it clearly now. I renounce my loyalties to House Sunstrider and its false prince. I pledge the blades of my Blood Knights to the defeat of Kil'jaeden and the restoration of Silvermoon. We will fight beside you, A'dal.
A'dal says: The Shattered Sun Offensive will surely benefit from the addition of your knights, Lady Liadrin. The battle for the Sunwell is but the first step on your new path, Lady Liadrin. Shattrath is open to you and all who follow you.

After Kil'jaeden is defeated in the Sunwell Plateau, Liadrin will accompany the Prophet Velen to the Sunwell and congratulate the players.

The Path to Redemption

When players of both factions enter The Sunwell to cleanse Quel'Delar in its sacred waters they can find Lady Liadrin among the other leaders of Silvermoon in The Sunwell's chamber. There Lady Liadrin can be seen preaching to Blood Elf pilgrims much in the way that Martik Tor'seldori preaches to pilgrims at Thrallmar. However, unlike Martik, Lady Liadrin preaches of redemption for the Sin'dorei rather than a path to power and glory.

Randomly, Liadrin makes a statement to some gathered Pilgrims:

This section concerns content exclusive to Legion.Liadrin now a member of Knights of the Silver Hand, she aids the new wielder of Ashbringer.

Hearthstone promo blog
Add a image to this gallery 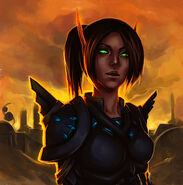 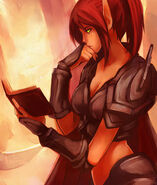 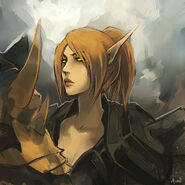 fan art by fatkittycat.deviantart.com
Add a image to this gallery

Retrieved from "https://wowwiki.fandom.com/wiki/Lady_Liadrin?oldid=2853436"
Community content is available under CC-BY-SA unless otherwise noted.