<Consort of the Queen>

Prime Consort of Alexstrasza, Archmage of the Kirin Tor (As Krasus)

Were you looking for Korialstrasz as seen as an NPC in Wrath of the Lich King? See Krasus.

Korialstrasz is the Prime Consort of the Dragonqueen Alexstrasza. As Krasus he is a senior member of the Kirin Tor, the ruling council of Dalaran.

Korialstrsz is a very ancient, wise, and powerful Red dragon. He was sponsored by his friend, Tyranastrasz, to become one of Alexstrasza's consorts just prior to the War of the Ancients. As her current prime consort Korialstrasz acts as Alexstrsza's majordomo in all affairs. He is fiercely loyal to his queen, and is "first in love". As an agent of the red dragonflight he is a protector of all things living. He watches over the younger races, often taking mortal guises and hiding amongst them. His most prominent guise in recent times is that of Krasus, a high elf mage of the Kirin Tor, and a member of the Six; the ruling council of Dalaran. Another guise is that of Borel, most likely his alias among the Convocation of Silvermoon.

Krasus appears to be a high elf wizard of extreme confidence, secure in his power and rank among the council. His very presence commands respect, and yet he is not proud or haughty. He remains in his elven form almost exclusively, transforming into a dragon only for special reasons or when in the presence of others of his kind. Those few who know his true nature have agreed to keep it a secret. [1] (S&L 43)

Krasus remains in his elven shape as long as possible during battle, revealing his dragon form only if desperate. He almost never shows his great strength in physical combat, preferring instead to fight with the spells and other arcane powers at his disposal. Should he choose to show his dragon side, he takes to the air swiftly, using his breath weapon and spell-like abilities to speed his escape. For all his strength and power, he is actually quite inexperienced in draconic combat. After all, he’s had little opportunity to practice during his decades of roaming the surface of Azeroth in humanoid form.[1] (S&L 43)

At the beginning of the first war against the legion, Korialstrasz became incredibly weak, which Alexstrasza, Tyranastrasz, and Ysera, determined was caused by Korialstrasz's future self, Krasus, existing in the same time period but being too far away. Korialstrasz and Krasus teamed up to help the night elf resistance to the Burning Legion's invasion. Often, while Krasus led the night elf spellcasters, Korialstrasz would either aid from above or rally some sort of surprise ally (neither version was able to shape-shift during this time). Both Krasus and Korialstrasz fought valiantly against the likes of Hakkar the Houndmaster, Neltharion the Earth-Warder, Mannoroth the Destructor, Archimonde the Defiler, and Sargeras the Destroyer. Krasus and his companions were eventually returned to their own time by Nozdormu the Timeless One after escaping the Great Sundering of the well of eternity. Upon his arrival in his own time period, Korialstrasz gave the axe of Broxigar to Thrall, and returned to Alexstraza.

At some point prior to the Second War, Korialstrasz assumed the identity of a high elf mage named Krasus, and became a member of the Kirin Tor — the ruling council of the magocratic kingdom of Dalaran. He was one of the senior leaders of the Kirin Tor, alongside its leader Antonidas, Prince Kael'thas and Kel'Thuzad. He, along with his colleagues, questioned the young mage Khadgar on the events that occurred in Karazhan some years previous — including the death of Medivh, the apparent presence of Sargeras, and Khadgar's descriptions of Draenor.[2] (ToD 104-112)

When Alexstrasza was captured by the Horde and held prisoner so that her children would serve the orcish war effort, Krasus continually used his position to his advantage. Korialstrasz continued to fight the battle that his kinsmen had given up long ago; the freeing of the Dragonqueen from the Dragonmaw Clan. All of that came for nothing though until, at the end of the war, the Kirin Tor sent Rhonin on an observatory mission to Khaz Modan. Korialstrasz though gave Rhonin other orders: to free Alexstrasza. Knowing that Deathwing would surely arrive to kill the Dragonqueen, Korialstrasz attempted to seek out the other three Aspects, Malygos, Nozdormu, and Ysera, knowing that only with their help could the black dragon be defeated. However, their responses held bleak hope for his Queen. Whilst trying to scry into Lord Prestor's hovel, he triggered a magical trap known as the Endless Hunger, and lost the two last fingers on his left hand.

When the final battle at Grim Batol began, Korialstrasz assumed dragon form once more and made haste to the battle in order to recapture the Demon Soul from Nekros Skullcrusher. Nekros tried to use the power of the Demon Soul on him but despite the great powers of it, Korialstrasz was able to break free from it. Weakened, he dropped to the earth where he summoned Rhonin to him and asked him to do this task. At the same time, the three Dragon Aspects arrived and began to battle Deathwing after they healed Korialstrasz. Though the battle turned for the worse, Rhonin destroyed the Demon Soul and the Aspects could now attack with their full power. Deathwing was no match for all of them, and he fled.

Korialstrasz was reunited with his Queen and, gathering up her unhatched children, they disappeared off into the night. He was later called upon by Nozdormu to heal a rift in time. (See above section on the War of the Ancients.) After correcting the timeline, Korialstrasz was last seen by Thrall flying away after delivering the axe and story of Broxigar to the Warchief.

Korialstrasz originally saw the re-accumulation of the Sunwell's energy, and did not want the Lich King's new death knight, the treacherous Prince Arthas, to discover it. Korialstrasz formed the energy into a humanoid shape — the form of a peasant girl named Anveena Teague. Hiding the truth from her until a later time, Korialstrasz gave Anveena the illusion of having lived a normal life. Though not intentionally, she came to life and gained feelings and emotions all on her own through his masterful illusion.

Borel is revealed as the one whom the characters in the book search for to remove the collars from Anveena and Kalec. He began telling Anveena the truth — that she was the avatar of the Sunwell — when Dar'Khan Drathir, the elf who allowed Arthas into Quel'Thalas, intervened and began draining the power from her.

Korialstrasz never meant to intrude upon the events taking place, until Dar'Khan — upon gaining some of the power of the Sunwell he drained from Anveena — took control of the red dragon. Unable to break the mind control, Korialstrasz was forced to do battle with the blue dragon Tyrygosa, until the spell was broken by Raac. While the battle against Dar'Khan continued, Korialstrasz had once more stepped to the side to observe all of what transpired. In the end, he said that he would continue to watch over Anveena and Kalec through the eyes of Raac as they stayed in the care of Lor'themar Theron, the Regent of Quel'Thalas.

Korialstrasz is mentioned on several occasions:

Korialstrasz, in the guise of Krasus, is a quest-giver at the Wyrmrest Temple in the Dragonblight, alongside Alexstrasza. It would appear that Korialstrasz was responsible for calling the ambassadors of the other Dragonflights - even the Black Dragonflight - to battle Malygos' crusade. 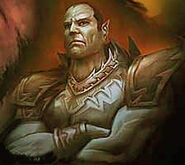 Krasus in 'The Well of Eternity'

Retrieved from "https://wowwiki.fandom.com/wiki/Korialstrasz?oldid=1569205"
Community content is available under CC-BY-SA unless otherwise noted.