Koltira Deathweaver appears to be the first death knight to join the New Horde, somewhat similar to his Alliance counterpart Thassarian. He is first seen in Acherus: The Ebon Hold along with Thassarian and Orbaz Bloodbane. After players enter stage two by completing

[55] Victory At Death's Breach!, he is captured by the Scarlet Crusade and winds up in the basement of Scarlet Hold.

During the Battle for Light's Hope Chapel, he takes part in the proceedings as a level 60 elite in

[55] The Light of Dawn. He is later found as level 80 elite in Agmar's Hammer in the Dragonblight, as well as on Orgrim's Hammer in Icecrown. During Cataclysm he is found as a level 85 elite at Andorhal in Western Plaguelands and takes part in a Quest chain starting with Quest:Scourge First... Alliance Later.

While in the service of the Lich King:

Koltira's first encounter with Thassarian was during the defense of Quel'thalas against the impending Scourge invasion with his brother Faltora, and Merriel at An'owyn. Merriel was quickly slain and Faltora charged Thassarian directly, only to be quickly beaten. Koltira noticed however, that Thassarian hesitated in killing him. While attempting to flee, Faltora was killed by an Abomination, but Koltira managed to escape.

Several hours later, Koltira followed and ambushed Thassarian. Feeling the conflict inside Thassarian, he offered Thassarian the choice to turn away from the Scourge and join him. Thassarian refused but spared his life until the next time they meet. The next day, the Elfgates failed and the Scourge entered Silvermoon where Koltira and Thassarian continued their duel. Thassarian emerged victorious and took Koltira's life. Koltira was then raised as another death knight of the Scourge. Despite being his murderer, Thassarian and Koltira see each other as brothers.

The Alliance and Forsaken are fighting over control of Andorhal and the remaining Scourge presence there. The Alliance, led by Thassarian, have taken control of the western portion of the town while the Forsaken, led by Koltira Deathweaver, have taken control of the eastern portion.[1] Over the course of the Battle for Andorhal, Koltira sends Horde heroes to deal with the remaining Scourge forces and, after defeating them, Thassarian and Koltira enter a truce. Some time afterwards Alliance forces launched a failed assault on the Forsaken. After repelling the invasion, Koltira sends agents of the Horde to speak with Lindsay Ravensun.

Upon meeting Ravensun, it is revealed that she is in reality Sylvanas Windrunner. After the Alliance is defeated, Sylvanas confronts Koltira about the truce with Thassarian, and scolds him for being weak. A portal to the Undercity is opened and Koltira is pulled through by a hooked chain, where Sylvanas will attempt to purge him of his compassion for Thassarian and make him more of a servant of the Horde - more specifically, a servant of Sylvanas and the Forsaken.[2]

In Legion, Koltira is rescued from the Undercity with the help of Thassarian and the Deathlord, leading to him pledging servitude to the Deathlord. His whereabouts in Battle for Azeroth are currently unknown.

Koltira, captured by the Scarlet Crusade 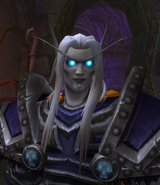 Koltira close-up
Add a image to this gallery

This section concerns content that is out-of-date.
Retrieved from "https://wowwiki.fandom.com/wiki/Koltira_Deathweaver?oldid=2852051"
Community content is available under CC-BY-SA unless otherwise noted.