Knights are traditionally horse-mounted warriors of the Alliance and the kingdoms of humanity. They are usually humans, although other factions have knights as well such as the Elves. Aside from champions, the knight is the warrior elite of humanity, especially of the Alliance, the best of the normal troops thus among the most feared. Many famous human warriors were knights such as Sir Anduin Lothar, regent of Stormwind and commander of the Alliance forces during the second war. For centuries they have been the bane of many enemies, the legendary Orgrim Doomhammer the warchief who fell Lothar was killed by a human knight, the orc Neckros Skullcrusher lost his leg to a knight. They typically form ranks and charge, which cause devastating effect on the battlefield. This proud young man carries himself as if he were the lord of the battlefield. Resplendent in his (probably hereditary) armor, he spends much of his time testing the balance of his lance and speaking with his horse. A knight's most favored weapons are the sword and mace [1] (APG 185) Knights appeared as units on the human or Alliance side in Warcraft I, Warcraft II, and Warcraft III. When one becomes a knight, he is given the title "Sir" in front of his name.

An armoured knight on his charger with his cape flowing, is an icon of the might of the human armies.

During the First War the Kingdom of Azeroth (later known as Stormwind) was served by an order of knights called the Brotherhood of the Horse, Knights of Azeroth, or the Knights of Stormwind. They formed the fighting elite in Azeroth's Majesty’s service.

The Knights of Lordaeron represent the fiercest fighting force in the armies of the Alliance. Protected by suits of heavy armor, they carry mighty warhammers with which to crush all who would threaten the freedom of their lands. Astride great warhorses, these honorable and just warriors serve as a symbol of order to the peoples of Lordaeron in these dark and chaotic times. Having learned of the fate the Knights of Azeroth suffered after the First War, they have sworn to both avenge their fallen brethren and free their homelands from the grip of the Orcish Hordes 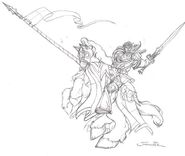 In World of Warcraft, Alliance knights can been seen in the Burning Crusade and Wrath of the Lich King expansions inside the Caverns of Time as friendly units. There are many knights in both the Argent Crusade and the Alliance Vanguard. Knights are also employed by several factions other than the Alliance; including the Death Knights and Necro Knights of the Scourge and the various knights employed by the Scarlet Crusade and the Argent Dawn. The blood elves have formed a paladin order called the Blood Knights.


Retrieved from "https://wowwiki.fandom.com/wiki/Knight?oldid=1736240"
Community content is available under CC-BY-SA unless otherwise noted.