Chieftain of the Bleeding Hollow Clan

Killed by Danath Trollbane[1] (or Khadgar[2])...or survived to be rounded up into an internment camp

Kilrogg Deadeye was a legendary orc warrior and chieftain of the powerful Bleeding Hollow clan. He is so named because he lost his left eye.

His name and condition have inspired the Warlock spell, the Eye of Kilrogg.

When Gul'dan promised the orc chieftains unlimited strength and power, Kilrogg was one of the first to accept the offer, drinking the blood of Mannoroth and becoming filled with strength and demonic rage.

As an older chieftain, Kilrogg Deadeye had become more unwilling to throw lives away in combat. In orcish politics older orcs become more pragmatic, which is often mistaken for cowardice by the younger generation. Prior to the sacking of Stormwind, Kilrogg had killed three of his sons and two grandsons already who thought they could rule the clan better.[3] (LG 221)

At the start of the First War, the Bleeding Hollow clan participated in the first attack on Stormwind Keep, along with the Twilight's Hammer clan, led by Cho'gall.[4] (W2Man 65) This first attack was an unmitigated disaster for the orcs, and Deadeye and Cho'gall blamed the failure on each other. A rift soon grew that threatened to rip the Horde apart before it had even begun its conquest of Azeroth. Gul'dan quickly stepped in to quell the problem, reinstalling Blackhand as Warchief of the Horde.

Kilrogg fought under Blackhand, and then later under Orgrim Doomhammer. During the Second War, his clan was stationed throughout Khaz Modan, where it controlled the Horde's vital mining and oil refining operations. When Orgrim Doomhammer was forced to withdraw back into Khaz Modan, after sending a large part of the Horde away to kill the treacherous Gul'dan and regain the lost honor of the orcs, Deadeye was one of the few that agreed with his decision.[5] (Tod 329) At the end of the war with the destruction of the Dark Portal and the defeat of the orcs; the aging Kilrogg refused to surrender, even after Doomhammer was captured.[6] (HPG 172) Kilrogg escaped and managed to avoid capture of his clan by the Alliance forces.

Kilrogg managed to evade the Alliance for two years. He, like most of the remaining orc leaders, was summoned to the site of the Dark Portal to discover that Teron Gorefiend had reopened the portal and that the Horde had united under Ner'zhul's leadership.[7] (BtDP 80-82) Kilrogg's knowledge of affairs in Azeroth enabled Ner'zhul and Gorefiend to successfully plan their next move.[6] (HPG 172-173) After recounting the events of the Second War to the old shaman, Kilrogg, along with his old comrades Grom Hellscream and Kargath Bladefist, led the charge back into Azeroth to steal items of power needed to aid Ner'zhul in his scheme.[8] (W3Man 18) [9]

On the way from Hellfire Citadel to the Black Temple to begin the ritual, Ner'zhul — accompanied by Kilrogg and Teron Gorefiend — made a stop in the ruined draenei necropolis of Auchindoun, a prospect that frightened the usually-fearless chieftain, believing that it would doom them if they went there.[7] (BtDP 273-275) However, he eventually gave in, accepting that it was necessary to rest there for a time on their way to Shadowmoon Valley.[7] (BtDP 277) It was there, in the depths of the Shadow Labyrinth — slowing the Alliance forces enough for Ner'zhul to make his escape — that Kilrogg met his end. In a duel with Alliance force commander Danath Trollbane (honorable, to the latter's surprise), the human threw his blade at Kilrogg's throat, taking advantage of the chieftain's half-blindedness. Kilrogg's throat was slashed open, but he managed to declare that by his blood the Horde would live and that he was returning to his ancestors. His eye glazed over, and he toppled sideways landing heavily on the floor.[7] (BtDP 322)

Kilrogg's tenacity lives on with his son, the Mag'har Jorin Deadeye.

Some accounts state that Kilrogg survived his clash with the Alliance forces to fight in the final battle of Beyond the Dark Portal. The alternate account is chronicled below.

It is said that Kilrogg Deadeye perished in the final battle at the Dark Portal on Draenor while fighting against Khadgar, but his body was never found.[6] (HPG 172) When Ner'zhul used the items to open more portals, Grom Hellscream and Kilrogg Deadeye realized Ner'zhul's mad plans would doom their entire race. They abandoned Ner'zhul and rallied as many orcs as they could find, driving them through the Dark Portal to the questionable safety of Azeroth just before Draenor was destroyed.[6] (HPG 134) [10] Their clans passed through just before Archmage Khadgar closed it completely. Hellscream and Deadeye hacked their way through the human ranks in a desperate bid for freedom, the Dark Portal exploding behind them. For them, and the remaining orcs on Azeroth, there would be no going back.[8] (W3Man 19) [11] Though Grom Hellscream and his Warsong clan managed to evade capture, Deadeye and his Bleeding Hollow clan were rounded up and placed in the internment camps in Lordaeron.[8] (W3Man 19) [12]

Warcraft Adventures: Lord of the Clans

In the cancelled Warcraft Adventures, Thrall and Orgrim would have freed Kilrogg Deadeye and the Bleeding Hollow from the internment camps. During a convocation on an Altar of Storms, Thrall would have convinced Kilrogg and the leaders of the Frostwolf and the Shattered Hand clans to work together to free the rest of the orcs and reunite the Horde.

World of Warcraft: Warlords of Draenor

Kilrogg Deadeye will  be making an appearance in the fifth expansion to World of Warcraft, Warlords of Draenor, where he will reprise in his role as the Chieftain of the Bleeding Hollow clan. He will inhabit the area known as the Tanaan Jungle.

Kilrogg Deadeye after being freed from the interment camps in Warcraft Adventures.

Concept art of Kilrogg Deadeye in Warcraft Adventures.
Add a image to this gallery 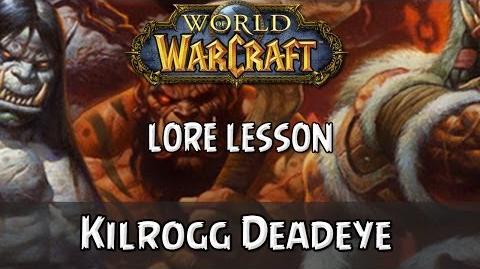 Retrieved from "https://wowwiki.fandom.com/wiki/Kilrogg_Deadeye?oldid=2691614"
Community content is available under CC-BY-SA unless otherwise noted.